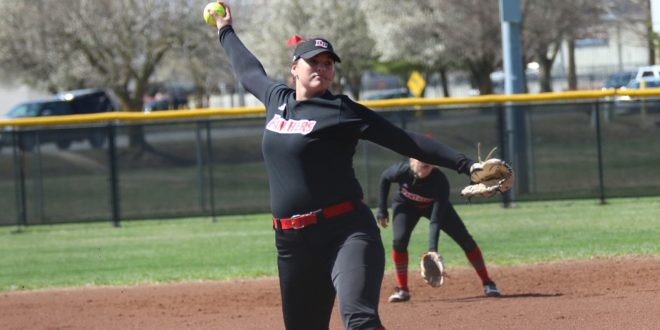 SPRINGFIELD, Mo. – Drury fought for a road doubleheader sweep of Truman State on Saturday as they defeated the Bulldogs 10-5 in game one, then scored two runs in the seventh to rally for an 8-7 victory in game two.

Drury took over game one scoring eight runs in the third inning. Trailing 8-0, Truman State got back in the contest with five runs in the bottom half of the frame. The Panthers added an insurance run in the sixth and seventh to put the game out of reach.

Kristina Bettis (18-2) got the win going seven innings and allowed seven hits, five earned runs, and four walks with 10 strikeouts. The five runs she allowed were the most since her first start of the season on Feb. 5. The game marked the seventh time she’s hit double-digits in strikeouts in a game this year.

Camryn BeDell and Sydney Sneed both had two hits in game one and Rylee Kolb hit her first home run of the year.

Bettis returned in relief in game two and broke Drury’s single-season record for wins as she closed the contest in an 8-7 victory to take her record to 19-2. She was the third Panthers pitcher of the game and went 1.1 innings allowing two hits but no runs with two strikeouts. Her 19 victories surpassed Kelsea Gartoff’s 18 wins during the 2012 season.

Drury led 6-2 going to the bottom of the fourth, but the Bulldogs pulled within two, scoring twice in the bottom half of the frame. Truman State then took a 7-6 lead with three runs in the sixth.

The Panthers tied the game in the top of the seventh inning on a sacrifice fly by Gracie Thomas, then went ahead 8-7 on Lauren Beier’s infield single that scored Abby Tiemann. Bettis allowed a base-runner in the bottom half of the inning with two outs on a hit-batsman but ended the game with a strikeout.

Tiemann had four hits in game two going 4 for 5 with three runs and two stolen bases. Kolb was 3 for 5 with two RBIs and a double. The Panthers stranded a season-high 14 runners in the win.

The game marked Drury’s first win of the year when they trailed after six innings, but it was their seventh victory this season decided in the last at-bat. The Panthers also won their 30th game of the year marking only the third time in program history Drury has reached 30 victories in a season.

The Panthers are back on the road next weekend when they travel to Lewis on Saturday for a noon doubleheader in Romeoville, Illinois.