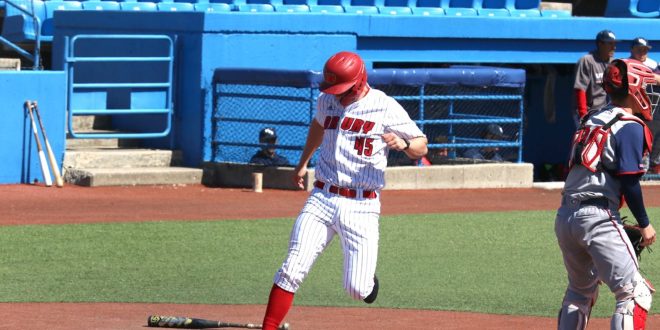 OZARK, Mo. – The Drury Panthers staked out an early 8-0 lead and fought off Southwest Baptist 13-6 at US Baseball Park in Ozark on Thursday.

Drury improved to 25-9 and 10-3 in the Great Lakes Valley Conference as they started the four-game series. The Bearcats dropped to 7-27 and 2-11 in the league.

The Panthers scored six runs in the first inning, getting a two-RBI double from Aaron Mann, a three-run home run by DJ McNew, and a ground ball that drove in a run from Austin Fennewald. Drury took an 8-0 lead an inning later when Mann blasted a two-run homer over the center-field fence.

Southwest Baptist scored six runs in the fourth to pull within two, 8-6, but Drury added three runs in the bottom half of the inning and put the game out of reach with two runs in the seventh.

“We talked early in the week about getting their starting pitching knocked out in the first three innings so we could erase some bullpen guys early in the series and we were able to do that,” said Drury head coach Scott Nasby. “If you are able to get to the other team’s bullpen early in a four-game set, that should help you for games two, three and four.”

Bearcats starter Corbin Reese (2-1) took the loss and didn’t get out of the first inning, and Southwest Baptist used four pitchers in the game.

The Panthers had to go to reliever Logan Pittman (4-1) in the fourth inning, but the junior from Overland Park, Kansas, finished the game going 5.2 innings and allowed eight hits and no runs with one walk and five strikeouts.

The two teams continue the series with a doubleheader on Friday. With the threat of storms, the games will move to a noon start at US Baseball Park.