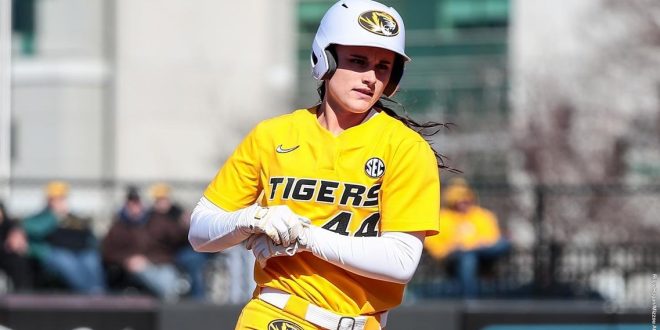 STARKVILLE, Miss. – No. 24/25 University of Missouri softball (24-15, 4-7 SEC) took the final game of the series over Mississippi State (26-14, 7-5 SEC) in extra innings by a score of 8-5. Gabi Deters crushed a two-run home run to give the Tigers the lead in the eighth and Jenna Laird followed that up with an inside-the-park home run to put the game away.

Mizzou took the lead in the top of the first inning. Brooke Wilmes singled and Casidy Chaumont doubled to put a pair of runners in scoring position. With two outs, Kendyll Bailey singled to left, bringing both runners to the plate. After a review, Chaumont was ruled out at home, concluding the inning with a 1-0 Mizzou lead.

The Bulldogs were able to get on the board in the bottom of the second inning with a trio of singles. Riley Hull’s single into center brought a pinch runner around to score to tie it up.

The Tigers loaded the bases with no outs in the third inning after Jenna Laird reached on an error, Brooke Wilmes walked and Casidy Chaumont reached on a bunt single. With one out, Chaumont was picked off at first, but Jenna Laird ran home from third to regain the lead.

The Mizzou lead would not last for long, however. With two on and one out, Jackie McKenna drove an 0-2 pitch over the center field wall, giving the Bulldogs a 4-2 lead. Kennedy doubled and St. Clair singled to put runners on the corners with two outs, but Laurin Krings picked up a strikeout to close the inning.

Brooke Wilmes cut into the Tigers’ deficit with a solo home run to right center in the fifth. She moved into a tie for ninth in program history with her 36th career home run while also taking sole possession of seventh in Mizzou history with 151 RBI.

In the top of the sixth, the Tigers tied it up. Alex Honnold drove lined a ball off the center field wall for a single to put a runner on base. With two outs, Riley Frizell popped a ball up between the second baseman and the right fielder, neither player called for it and Honnold was able to go all the way around the bases to make it a tie ballgame. The inning ended after a substitution issue.

Mizzou continued to get on base in the top of the seventh. Brooke Wilmes was hit by a pitch to lead off the inning. Casidy Chaumont reached on a fielder’s choice and the Bulldogs’ pitcher threw the ball away, allowing Wilmes to reach third while Chaumont moved to second. A fielder’s choice off the bat of Moll allowed Wilmes to come to the plate after an errant throw from the shortstop, giving Mizzou a 5-4 lead.

The Bulldogs were just able to tie it up in the bottom of the seventh. With a runner on second and two outs, a bloop single just behind third base fell in to tie it up. Mississippi State was able to load the bases, but Jordan Weber was able to work out of the jam.

Julia Crenshaw led off the top of the eighth for the Tigers. A 1-1 pitch was initially ruled a foul ball, but upon review, she was hit by the pitch. Emma Raabe executed a perfect sacrifice bunt to move Crenshaw into scoring position. Gabi Deters then crushed the first pitch she saw over the center field wall for a go-ahead two-run shot. Jenna Laird then skied a fly ball to deep center field that bounced off the wall, well away from the center fielder. She was able to go all the way around the bases, but she was called out at home. However, after review, obstruction was called, giving Laird an inside-the-park home run.

Weber closed it out with a clean inning in the home half, securing the victory.

Brooke Wilmes reached in all five of her plate appearances, going 2-for-2 with a solo home run, two walks and she was hit by a pitch while scoring three runs.

Gabi Deters crushed her third home run of the season while going 2-for-4, her first multi-hit game as a Tiger.

Casidy Chaumont doubled while going 2-for-5 at the plate. She has five extra-base hits over the last four games.

Kendyll Bailey continued her impressive on base streak with her RBI single in the first and a walk. Bailey has reached in 15-straight contests.

Jordan Weber went 1.1 innings in relief, picking up her seventh win of the season.

The Tigers have homered three or more times in a game 10 times in 2022.

Mizzou will host Georgia in a three-game series at Mizzou Softball Stadium starting on Thursday evening at 5 p.m. CT. Thursday’s game will be available on SEC Network +.