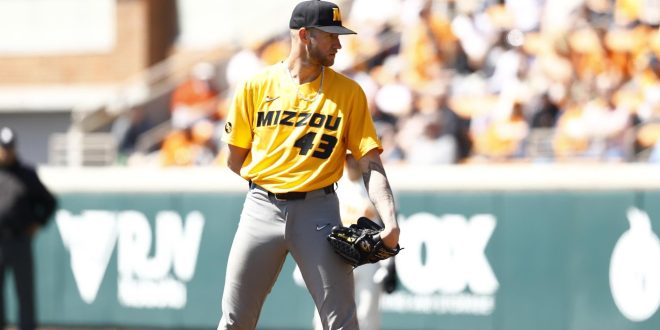 KNOXVILLE, Tenn. – Missouri baseball rallied late to move the tying run to third base in the ninth, but a pair of Luc Lipcius home runs propelled No. 1 Tennessee to a 4-3 win in the series finale on Sunday at Lindsey Nelson Stadium.

Mizzou (18-11, 3-9 SEC) outhit the Volunteers 9-5 on the day, but the two home runs and an extra out proved the difference. Austin Marozas (1-1) took the loss despite a solid start, going five innings while allowing four runs on four hits. Nathan Landry followed with three scoreless innings as the Tigers became just the fourth team to hold Tennessee (31-1, 12-0 SEC) to four runs or less this season.

After beginning the day quietly, the Mizzou bats roared to life late. The Tigers plated a pair in the seventh as Mike Coletta doubled to open the inning. The catcher scored on a double off the top of the wall from Nander De Sedas, who missed a three-run homer by mere inches. Josh Day picked up the first of his two RBI with a ground out to cut the deficit to 4-2.

The Tigers would strike again in the ninth using a single from Ross Lovich and a bunt-single from Ty Wilmsmeyer to set the table. Lovich would score on a sacrifice fly from Day to cut the deficit to one, but a ground out left the tying run stranded at third.

Tennessee scored three runs in the fifth to provide just enough cushion to hold off the Tigers. A two-out walk was followed by Lipcius’ second home run of the day to make it 3-0 Vols. Mizzou nearly escaped the inning without further damage, but a wild pitch on a strikeout extended the frame and a double scored the decisive run.

Coach Bieser on a razor-thin finale in Knoxville…

“Just a really well-played game for both teams. We didn’t get that big hit there at the end and we had some opportunities early in the game to do some things and we just couldn’t come up with a big hit. [Austin] Marozas went out and did his job. He missed a couple pitches and they made him pay dearly and that’s the difference in the game.”

Mizzou returns home to begin a five-game homestand on Tuesday night against Western Illinois. First pitch is set for 6 p.m. at Taylor Stadium.