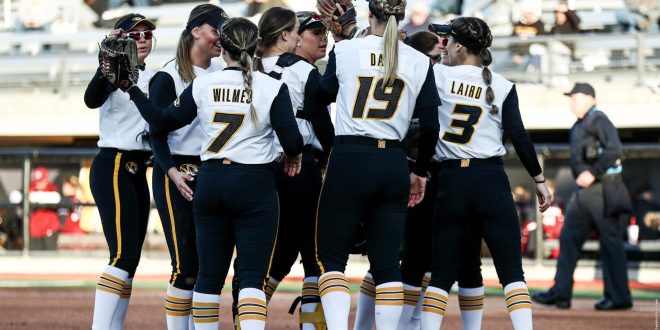 Tigers Shut Out at Mississippi State

The Tigers could not get on the board in the first inning, snapping a five-game streak with a run in the first. Mississippi State put the pressure on Mizzou early. Davidson drew a one-out walk and Chloe Malau’ulu drove a 1-0 pitch deep to center, but Brooke Wilmes reached over the wall to record the out. However, the next batter, Paige Cook, drove one to deep left center for a two-run shot.

Trailing 2-0 in the third, Mizzou was able to move a leadoff walk into scoring position. With two outs in the inning, Brooke Wilmes smoked a ground ball back up the middle, but it deflected off the pitcher’s leg, right to first base for the final out of the inning, preventing a likely RBI single.

The Tigers threatened again in the fourth. Bailey walked to lead off the inning and Snider reached second on a wild pitch after entering as a pinch runner. However, Wert grounded a ball to short and Snider was caught attempting to reach third for the first out. Casidy Chaumont then came to the plate and doubled off the left field wall to put two runners in scoring position. The next two Tiger batters were retired on a sharp ground ball to second and a strikeout.

Mississippi State put a runner in scoring position in the fourth and the fifth, but Weber was able to work around the baserunners to keep the margin at two.

In the seventh, Honnold reached on a leadoff walk, but Mizzou was not able to bring her in.

Kendyll Bailey has reached base safely in 14 consecutive games, but her hitting streak was snapped at nine.

Casidy Chaumont provided the Tigers’ lone hit with a double off the left field wall. She has doubled in three consecutive games.

The Tigers were shut out for the second time on the year.

Sunday’s series finale is scheduled for a noon first pitch in Starkville. The game will stream live on SECN+.