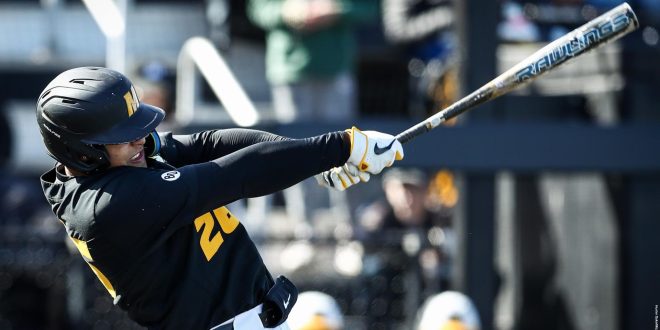 KNOXVILLE, Tenn. – For a second-straight night, Missouri baseball jumped on No. 1 Tennessee early but a sixth-inning grand slam off the bat of Jordan Beck flipped the game in an 11-4 Volunteer win on Saturday at Lindsey Nelson Stadium.

Juniors Luke Mann and Torin Montgomery went back-to-back with two outs in the first inning to stake Mizzou (18-10, 3-8 SEC) to another 2-0 lead.

Tennessee (30-1, 11-0 SEC) responded in the second with back-to-back-to-back home runs to start the inning. The Tigers stopped the bleeding at three and battled back in the top of the third to retake the lead. Fox Leum doubled off the top of the center field wall to make it 4-3 Mizzou. The lead would hold until the decisive sixth inning.

Chase Dollander (6-0) earned the win for the Volunteers with 6.2 innings pitch and four runs on the ledger. The four runs matched the most Dollander has allowed this season.

The Vols found their magic again in the sixth inning where a pair of singles and a walk set the stage with one out. Beck stepped to the dish and launched an 0-1 offering into the left field deck for a grand slam and a 7-4 Tennessee lead.

Coach Bieser on another quick start and Tennessee’s rally…

“We’re kind of in that rut, we’re getting good starting pitching and coming out swinging the bats pretty good and getting that lead. We just can’t hold it in the bullpen, but I believe the pieces are there, we’ve just got to fix it.”