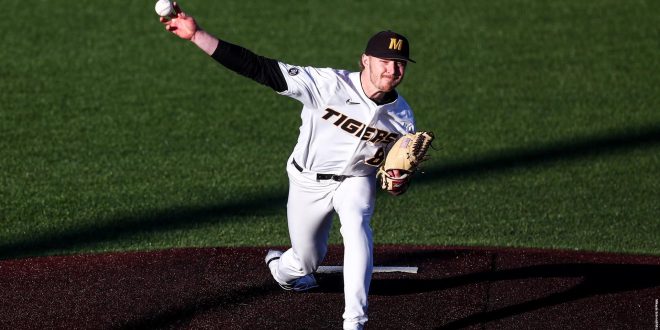 KNOXVILLE, Tenn. – University of Missouri baseball carried the lead into the seventh inning against No. 1 Tennessee, but the Volunteers strung together six runs in two innings to spoil the upset bid in an 8-3 series opener on Friday night at Lindsey Nelson Stadium.

In a tight game, the breaks did not fall Mizzou’s way as the Tigers (18-9, 3-7 SEC) saw a Tennessee home run stand after potential fan interference in left field. Tennessee (29-1, 10-0 SEC) used the tight call to stay within reach before breaking through in the seventh and eighth innings.

Junior Luke Mann got the Tigers started with a bang, launching a two-run home run off the top of the scoreboard in the first inning. Sophomore Trevor Austin added the Tigers’ other RBI with a two-out single in the sixth.

Tennessee scored in each of its final four at-bats to rally for the victory. Trey Lipscomb and Evan Russell each homered for the Vols in the late comeback.

Tennessee used three consecutive hits in the bottom of the seventh to plate a pair of runs and take its first lead of the night. A one-out double from Christian Scott sparked the inning before a double Jorel Ortega tied the game at 3-3. Ortega scored on a single from Cortland Lawson to put the Vols on top.

Coach Bieser on missed opportunities in the early innings…

“I think we had a chance to separate ourselves early and that would have made a big difference. We needed a big hit with bases loaded. We had some opportunities there and we left a lot of runners on base. We’ve got to be better getting those runners in.”

The Tigers and Vols continue the series with a 7 p.m. ET/6 p.m. CT on the SEC Network Saturday evening.