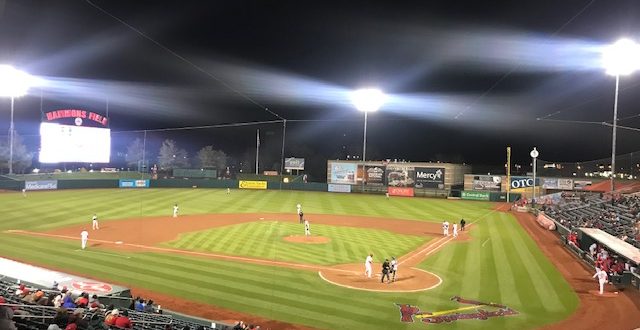 The Northwest Arkansas Naturals pick up an Opening Night 11-8 win over the Springfield Cardinals on a chilly evening at Hammons Field.

The three hour and 55 minute game featured a combined 17 walks, and the fans that braved the cold were treated to Opening Night fireworks at the end of the night.

Many of the 3,682 in attendance Friday had already called it a night by that point.

The Naturals got on the board first, scoring two runs in the bottom of the 1st inning off Cards starter Connor Lunn.

Michael Massey drove in a run with a groundout, and one batter later, catcher Sebastian Rivero doubled into left center, scoring another run and giving the Naturals a 2-0 advantage.

Right fielder Matt Koperniak hit the first homer of the season for Springfield, with his two run shot to right in the bottom of the 2nd off Naturals’ starter Drew Parrish knotting the contest 2-2.

The Naturals tied the game in the 5th on Seuly Matias’ two run single, making it 4-4, but Springfield got the lead right back in the bottom of the inning on Malcolm Nunez’ RBI double.

The Cards added three more runs in the bottom of the 6th inning off Northwest Arkansas relievers Christian Cosby and Jonah Dipoto to go up 8-4.

Dipoto allowed one run to score that inning when he uncorked a wild pitch.

But as wild as Naturals pitchers were in the 6th, the Cardinals struggled to get outs in the 7th inning as Northwest Arkansas sent ten hitters to the plate.

Matias drove in another run with a double, but there were three walks in the inning to go along with three singles. Springfield’s lead had evaporated, and the game was tied 8-8.

The Naturals un-tied it in the eighth on Michael Massey’s RBI single, and added another run on a groundout by the designated hitter, Robbie Glendinning.

Northwest Arkansas tacked on an insurance run in the ninth on a throwing error by Walker.