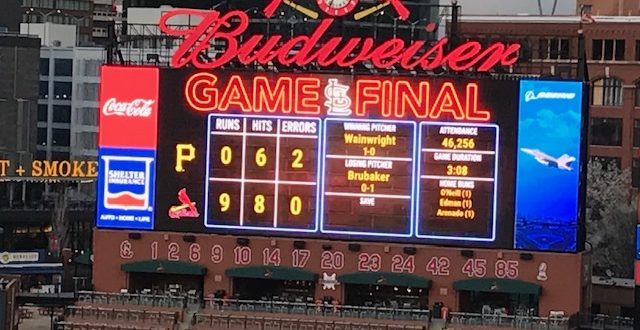 The St. Louis Cardinals got six shutout innings from veteran starter Adam Wainwright and shut out the Pittsburgh Pirates 9-0 on Opening Day at Busch Stadium.

Wainwright (1-0) allowed five hits, struck out six, and did not walk a batter.

Harrison Bader doubled to lead off the 6th inning, was moved to third on a grounder by Tommy Edman, then scored on a sacrifice fly by Dylan Carlson to make it a 5-0 Cards lead.

St. Louis hit two homers in the 9th off Pirates reliever Aaron Fletch, including a solo shot to left by Edman, and later a two run home run by third baseman Nolan Arenado.

Just before Arenado’s blast, O’Neill picked up his fifth RBI of the game with a sacrifice fly.

In his first game back in a Cardinals’ uniform, designated hitter Albert Pujols went 0-5, reaching on an error in the 3rd.

A sellout crowd of 46,256 witnessed Opening Day at Busch Stadium, with the traditional Clydesdales parading around the warning track and the Cardinals Hall of Famers wearing their red jackets.

After an off day on Friday, the series resumes Saturday afternoon with a 1:15 p.m. game between the Pirates and Cardinals.