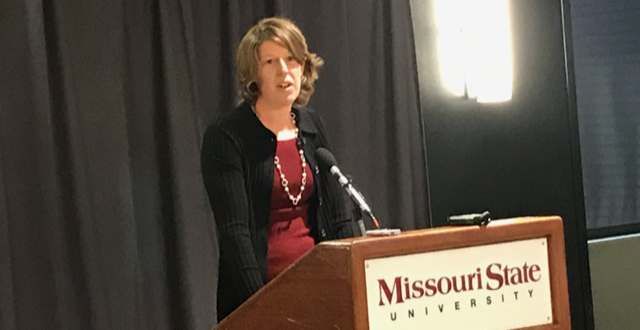 As the band played the school fight song, the ninth head coach in the history of Missouri State Lady Bears basketball got a standing ovation as she stepped to the podium at Plaster Student Union Thursday.

Beth Cunningham, who brings 20 years of coaching experience at the college level, including nine as a head coach at Virginia Commonwealth, says it’s an “honor and a privilege to lead this program.”

She thanked Coach Mox, as well as former Lady Bears Coach Kellie Harper, for the tremendous success they’ve had at MSU and says she consulted both coaches before accepting the job at Missouri State.

Cunningham says she has vivid memories of being recruited by former Lady Bears Coach Cheryl Burnett when she was graduating high school in 1993.

Cunningham says although she didn’t ultimately end up coming to Springfield, she was very aware with the success Burnett was having and the tradition she was building at then Southwest Missouri State.

The new coach says the players are the most important group. “You’re my motivation, you’re my inspiration,” Cunningham said. “Leading our program is never about one person. It’s not about me, and it never will be. It’s about you. My one and only mission is to number one, assist you to be the very best person you can be, and number two, the very best basketball player you can be.”

Missouri State Athletic Director Kyle Moats says he got a head start on the process of selecting a head coach, knowing that Coach Mox’s success would make her an attractive candidate at a Power Five school.

President Clif Smart confirmed the University of Virginia contacted MSU several weeks before the season was over, saying they had an interest in Mox.

Smart says he and Moats interviewed two finalists for the job on Saturday and Sunday, spending Sunday afternoon with Cunningham in North Carolina.

The two offered Cunningham the job Sunday evening before flying back to Springfield.

The new coach met with the team Wednesday night, and the MSU Board of Governor’s approved Cunningham’s contract Thursday morning.

Listen to the entire introduction and press conference here: