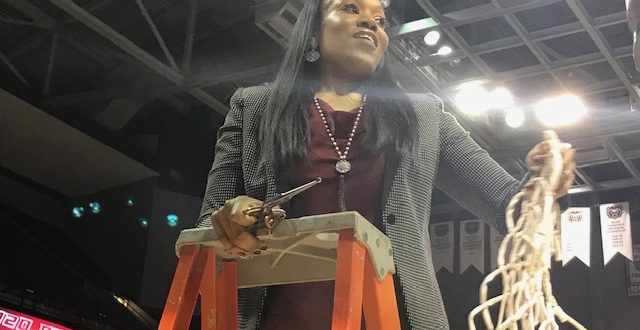 After leading the Missouri State Lady Bears to two NCAA Tournament appearances in the last three seasons, Head Coach Amaka Agugua-Hamilton is leaving to become the head coach at the University of Virginia.

The Virginia women’s basketball program made the announcement Monday morning with a “Welcome Coach Mox” tweet.

Agugua-Hamilton led the Lady Bears to a 74-15 record in her three seasons in Springfield, including a 46-6 mark in the Missouri Valley Conference.

The Lady Bears beat Florida State in the “First Four” round of this year’s NCAA Tournament before losing to nationally ranked Ohio State 63-56 in the opening round of The Big Dance.

CHARLOTTESVILLE, Va. — The University of Virginia has named Amaka Agugua-Hamilton as its next women’s basketball head coach, the university announced today (March 21), ending her three-year stint at Missouri State University.

“Coach Mox” compiled a 74-15 overall record in her tenure with the Lady Bears, including a 46-6 ledger in the Missouri Valley Conference with three 20-win campaigns. Missouri State captured MVC regular-season titles in 2020 and 2021 under her guidance with NCAA Tournament appearances in 2021 (Sweet 16) and 2022. She also earned MVC Coach of the Year honors twice in her three seasons at the helm.

“I can’t thank Amaka, Billy and Eze enough for taking a chance on Missouri State,” said Missouri State Director of Athletics Kyle Moats. “Coach Mox has far exceeded our expectations as a coach, colleague, and mentor to our student-athletes. Her record speaks for itself, but the way she has dealt with the many challenges in her path over the past three years has been remarkable. Our players have improved tremendously on the court and have grown so much more as people. I know she will be evaluated on her wins and losses, but there is far more to her as a person than wins and losses.

“The Missouri State family will be forever grateful to her for upholding our great women’s basketball tradition and graduating quality young women.”

Originally from Herndon, Virginia, Coach Mox led the Lady Bears to 25-8 record in 2021-22 and runner-up finish in the Missouri Valley Conference. Missouri State defeated Florida State in the NCAA Tournament opening round before being eliminated from the tournament by Ohio State, 63-56, on Saturday.

“She has been a tremendous ambassador for the university, for the city of Springfield and certainly for our athletic program during her tenure here,” said Missouri State University President Clif Smart. “Those impressions will be long standing and have helped maintain our women’s basketball team as one of the nation’s most successful programs.”

According to Moats, a national search for Agugua-Hamilton’s replacement will begin immediately. As is our customary, university administrators will not comment on the search process until a new coach has been selected.