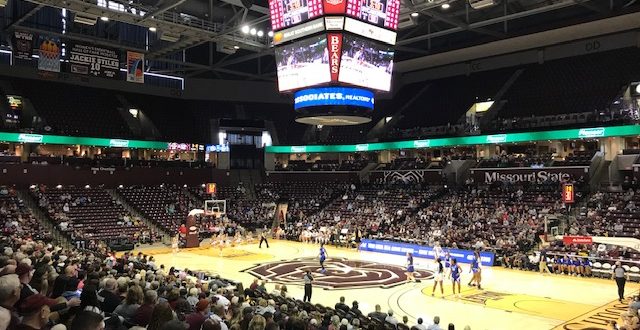 The game had all the emotions of Senior Days in the past, and then some.

Fifth year senior Abby Hipp, who’s missed all but four games this season with a torn ACL, was in the starting lineup for the Lady Bears and was handed the ball after Missouri State controlled the opening tip.

Hipp dribbled the ball in the backcourt as her team applauded and the fans stood and cheered, then walked off the court to a warm ovation.

The Sycamores jumped out to a 15-9 lead with just under four minutes left in the opening quarter, but the lead didn’t last long as the Lady Bears put together an 11-0 run on a pair of layups and a free throw by senior Sydney Wilson, four free throws by senior Abi Jackson, and a bucket by Ifunanya Nwachukwu.

Missouri State lead 22-17 at the end of the first quarter and after the Sycamores cut the advantage to four on two occasions early in the second period, MSU went up by double digits when Jennifer Ezeh made a free throw with 3:41 left in the frame.

Missouri State went into the locker room at halftime ahead 41-30 and continued to dominate in the second half, increasing its margin to 20 points, 55-35, when Wilson hit a layup at the 2:02 mark of the third quarter.

Indiana State trailed 55-39 going into the final ten minutes, but fell back behind by 20 points before making a late run to pull within eight, 67-59.

After the Sycamores’ Natalia Lalic missed a three pointer with just under two minutes left in regulation, the Lady Bears got a free throw from Calip with 1:38 left to make it a 68-59 contest.

Hunter got the margin down to seven once again with a jumper at the 54 second mark, but Brice Calip sealed the win with two free throws with 33 seconds left.

Wilson led all scorers with 18 points on 6-9 shooting, hitting two of her team’s three treys on the afternoon.

Wilson has announced she will be coming back for a fifth year as a Lady Bear, while Jasmine Franklin, who tore her ACL during the season, is considering coming back next season as well, electing not to be honored during Senior Day activities.

Calip has played in 157 games as a Lady Bear, more than anyone in program history, and has 119 wins, also a school record.

Missouri State improves to 22-5 on the season, 13-3 in the Missouri Valley Conference.

MSU continues to trail Southern Illinois by one game in the conference standings following SIU’s 80-66 win at home over Evansville Saturday.

The Lady Bears hit the road for their final two games of the regular season, playing at Valparaiso Thursday at 6:00 p.m. and at Loyola-Chicago next Saturday at 1:00 p.m.