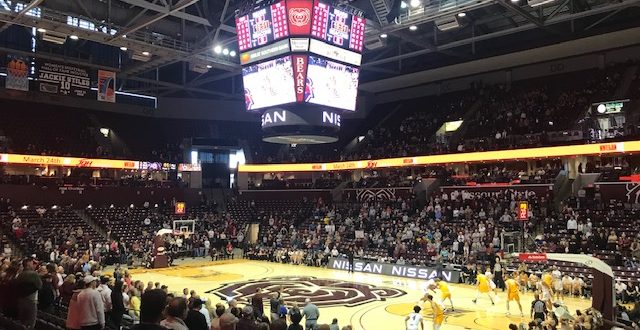 The Missouri State Bears get five three pointers each from Ja’Monta Black and Jaylen Minnett and Isaiah Mosley scores 22 points in an 84-66 win over Valparaiso Saturday afternoon at JQH Arena.

The win keeps the Bears very much alive in the race for the Missouri Valley Conference regular season title as MSU goes to 19-8 overall, 10-4 in the Valley.

Missouri State is tied with Loyola for second (the Ramblers are 9-3 in league play), and is just a half game behind Northern Iowa, who’s 10-3 in the Valley.

The Bears jumped out to an early 6-0 lead on buckets by Gaige Prim, Lu’cye Patterson and Mosley.

Black hit his first two treys of the game moments later as the Bears went up 21-16.

Mosley drained a three pointer at the 4:49 mark of the first half to put the Bears ahead 31-22, and converted a three point play with a bucket and a made free throw with 3:04 left to put MSU ahead by ten, 36-26.

Missouri State maintained a 41-36 lead at halftime, then got a quick two points from Prim and another three pointer from Black to start the second half to get the margin back to double digits.

The Bears opened up things after that, going ahead by as many as 20 points in the second half on the strength of 50% shooting from the floor.

MSU went 14-15 from the free throw line for the game, while Valpo converted on 25 of 27 attempts.

The Bears had 16 assists as a team, five of them by Clay.

Black, Minnett, and Prim each scored 15 points to back up Mosley’s effort and Donovan Clay pulled down 11 rebounds.

Ben Krikke scored 20 points to lead Valparaiso, who falls to 11-14 on the season, 4-9 in the Missouri Valley Conference.

The Bears will host Indiana State Tuesday night at 7:00 at JQH Arena before traveling to Northern Iowa for a big game on Sunday, February 20th at 1:00 p.m.