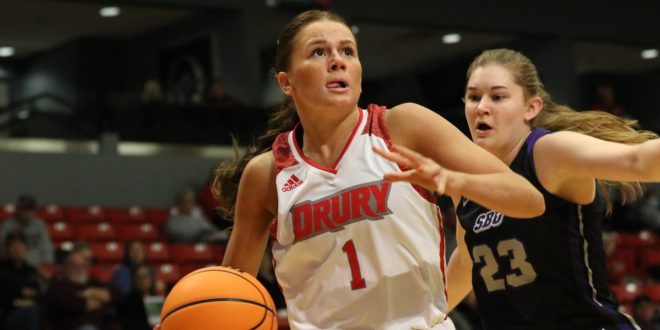 SPRINGFIELD, Mo.— The Drury Lady Panthers used a 30-12 third quarter to pull away from Southwest Baptist for an 82-56 win on Saturday at the O’Reilly Family Event Center.

The Lady Panthers led 36-26 at halftime, then blew open the lead going on a 15-2 run to start the third quarter. Drury took a 66-38 lead into the fourth quarter and led by as much as 29 in the second half.

The Lady Panthers forced 25 turnovers against Southwest Baptist while only committing 10. Drury shot 53 percent from the field, hitting 37 of 70 shots, while the Bearcats went 20 of 47 for 43 percent.

None of the Bearcats reached double-figures in scoring.

Drury is back at home on Thursday, Jan. 27, when they host Maryville at 5:45 pm in the O’Reilly Family Event Center.