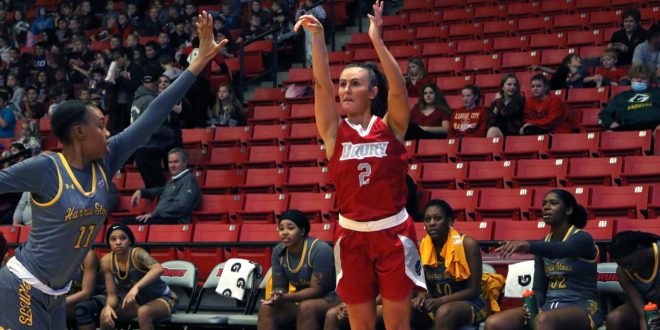 Drury is coming off of a loss for only the second time this season, having fallen 67-66 on Monday night at Truman State. The Lady Panthers are 18-2, 8-1 in the Great Lakes Valley Conference, and are in first place in the West Division. Drury is also still ranked number one in NCAA-II in this week’s coaches’ poll.

The Bearcats are 10-7 and 5-4 in the GLVC after their 79-68 win at Missouri S&T on Thursday. Southwest Baptist is playing their third-straight road game but is 2-0 on the trip so far with a 61-54 win at William Jewell on Monday that started the road swing. SBU enters Saturday’s game in third place in the West.

Saturday’s game is the second meeting between the two teams this season. Drury won in Bolivar, 77-60, on Jan. 4. The Lady Panthers jumped out to a 24-4 lead after the first quarter and led 41-27 at halftime. Payton Richards led DU with a career-high 22 points, while Kyleigh Vaught had 21 for the Bearcats. Drury forced 27 turnovers against Southwest Baptist while only committing eight in the game.

Drury leads the all-time series against Southwest Baptist 13-2 and has won five straight against the Bearcats.

With Paige Robinson out with an injury, Alana Findley leads the Lady Panthers averaging 14.9 points and 8.2 rebounds.

About the Bearcats
Southwest Baptist ranks second in the GLVC in points allowed (60.5), and they are the second-best three-point shooting team in the league at .363. Kyleigh Vaught leads SBU in scoring, averaging 13.9 points, and ranks 13th in the league in scoring average. Her 3.1 assists are tied for 7th on the GLVC leaderboard.

Roster Update
As of Friday, the Lady Panthers are expected to be without Paige Robinson (hand/wrist), Kate Gilbert (leg). Kaylee DaMitz is set to return after missing three games in COVID protocol. Drury was without five players for their first two games of the week following the holiday break, and has played with at least two starters out for their previous seven games. Drury has not yet had a game postponed or canceled this season.

Up Next
The Lady Panthers are home twice next weekend as they host Maryville on Thursday, Jan. 27, with tipoff at 5:45 pm, then Missouri S&T on Saturday, Jan. 29 at 1 pm at the O’Reilly Family Event Center.