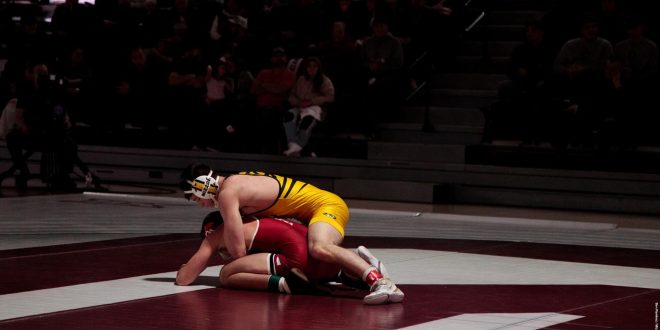 COLUMBIA, Mo. – Freshman Keegan O’Toole was named the No. 1 ranked wrestler at 165 pounds in the first coaches’ ranking for the 2022 D1 Wrestling Championships, the NCAA announced Friday afternoon. Nine Missouri wrestlers were ranked in the top 33 with four in the top-10.

O’Toole ascends to the No. 1 ranking for the first time in his career after spending the majority of the 2021-22 season to this point as the third-ranked athlete in his weight class. He enters Saturday’s matchup against No. 23 South Dakota State at 14-0 with 12 bonus-point victories. O’Toole also ranks second in FloWrestling’s Dan Hodge Award predictor.

Elam enters the first coaches’ ranking in the top-5 following an 12-1 start to his second season. Four of his wins are over ranked opponents, most recently against No. 12 Jake Woodley in Thursday’s dual at Oklahoma. Hart and Mocco both return to the top-10 following impressive performances at the Southern Scuffle in early January, where they each recorded top-10 wins.

Redshirt freshman Noah Surtin and redshirt sophomore Zach Elam rounded out the Tigers’ starters in the top-15. Surtin ranks No. 12 at 125 pounds and Elam ranks No. 15 at 285 pounds.

Redshirt sophomore Jeremiah Kent (No. 16 at 184 pounds), freshman Josh Edmond (No. 17 at 149 pounds) and junior Jarrett Jacques (No. 21 at 157 pounds) also received top-25 rankings. Edmond and Jacques’ positions both improved off the Jan. 18 InterMat rankings.

Visit MUTigers.com for the latest information on all things Mizzou Wrestling. You can also find the Tigers on social media by liking us on Facebook (Mizzou Wrestling) and following us on Twitter and Instagram (@MizzouWrestling).