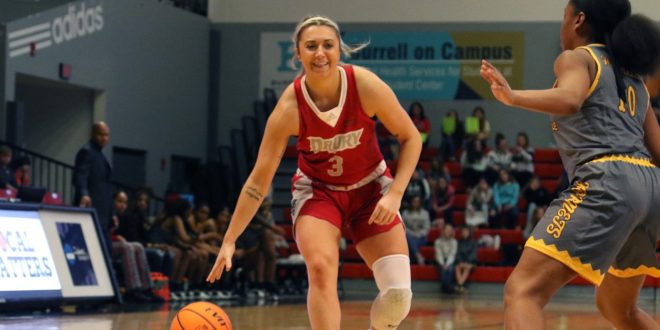 SPRINGFIELD, Mo.— The Drury Lady Panthers remained the number one ranked team in this week’s NCAA-II coaches’ poll. Voting for the poll was completed on Sunday and did not take into account Drury’s 67-66 loss at Truman State on Monday night, which dropped the Lady Panthers to 18-2 and 8-1 in the Great Lakes Valley Conference.

This week’s poll marked the third consecutive week Drury has been ranked number one. Drury received 22 out of a possible 23 first-place votes. Fort Hays State (15-1) is ranked second nationally, while Glenville State (14-0) is ranked third, and Texas A&M Commerce (13-1) received the other first-place vote and is fourth. Ashland (13-1) moved up to fifth this week.

This week’s poll marks the 127th consecutive week the Lady Panthers have been ranked in the top 25, the longest streak in the nation. It is also their 65th straight week in the top 10.

Drury plays only game this week as they host Southwest Baptist on Saturday at 1 pm in the O’Reilly Family Event Center.

Fans can purchase men’s and women’s basketball tickets online on the Drury Panthers website, by contacting the O’Reilly Family Event Center box office at 417-873-7000, or emailing the box office – tickets@drury.edu.