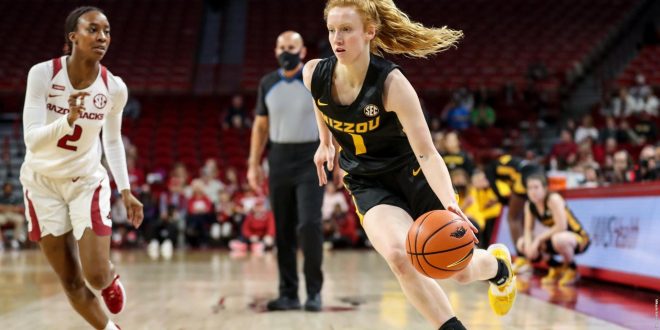 The Tigers are back in action after a tough 87-85 overtime defeat on the road at No. 12 LSU. After trailing by as many as 13 points during regulation, Mizzou took the lead late in the fourth quarter behind a 26-point, 17-rebound performance from Aijha Blackwell. LSU was able to take the contest in overtime behind a late lay-in with less than 10 seconds to go.

Mizzou is looking to pick up another signature win after the Tigers’ historic win over No. 1 South Carolina. The victory marked the program’s first-ever win over an AP No. 1 team all-time.

Junior guard Aijha Blackwell has put up massive numbers in the 2021-22 campaign. She leads the Tigers at 16.6 points per game and leads the nation with 13.1 rebounds per game. Blackwell has recorded 12 double doubles on the season which is tied for first nationally.

Lauren Hansen and Hayley Frank combined for 13 three-point field goals against LSU. They are the first pair of Mizzou teammates to hit six threes apiece in a single contest.