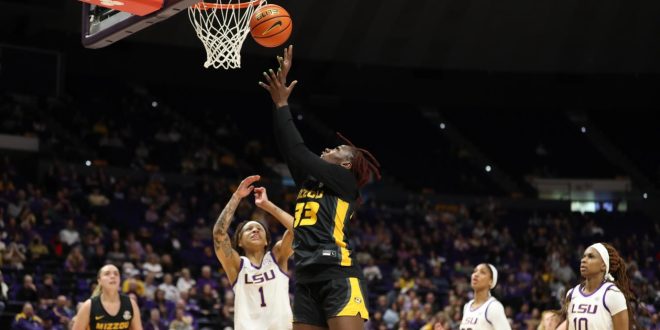 At the end of the first half Mizzou trailed 44-33. Blackwell was just beginning to heat up, scoring the final 11 points of the second quarter for Missouri after a scoreless first.

Mizzou closed the gap to as few two points late in the third quarter with Lauren Hansen scoring 11 points in the period.

In the final period of regulation, Mizzou took a one-point lead on two occasions, both after clutch drives and lay-ins from Haley Troup who returned after missing the last two games. After trading one-point leads, the two teams entered the final minute of regulation tied. Neither side was able to score with Mizzou’s last-second layup just rolling off the rim.

LSU got out to a hot start in overtime, scoring the first four points. Aijha Blackwell returned the favor, sinking layups on each possession. With LSU leading by two, Haley Troup sunk two free throws to tie it with 13 seconds to go. Pointer’s floater with five seconds was the difference as Mizzou was unable to tie it back up at the buzzer.

Aijha Blackwell picked up her 12th double double of the season with her 26-point, 16-rebound effort. Blackwell currently leads the nation in double doubles and rebounds. She is the only player in the nation to average over 10 defensive rebounds per game.

Nine of Blackwell’s 12 double doubles have come with 14 rebounds or more.

She has recorded a double double in six consecutive games, matching her previous career best.

Blackwell moves up to 34th on the Mizzou all-time scoring list with 1,037 career points.

Lauren Hansen and Hayley Frank are the first Mizzou duo to each hit at least six threes in a single contest.

Mizzou went 15-for-31 from three on the night, matching a season high in both makes and attempts.

Mizzou will host No. 17 Georgia at Mizzou Arena on Monday night at 6 p.m. CT. The contest with air on SEC Network.