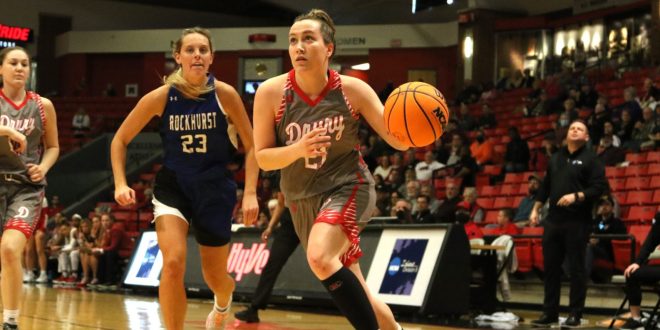 Rockhurst Attendance Policies
In response to the recent rise of COVID-19 community transmission in Jackson County and the surrounding Kansas City metro, Rockhurst University has updated its mask policy for upcoming athletics events.

Spectators and game personnel will be required to wear a properly fitting mask throughout their duration of time on campus in an effort to protect student-athletes, staff and the overall campus community. The mask policy will remain in place until further notice and aligns with the University’s Spring 2022 COVID-10 Policies: https://www.rockhurst.edu/covid-policies

Number One Ranked Drury continues road trip at Rockhurst
The number one ranked Drury Lady Panthers play the second game of a three-game road trip on Saturday at Rockhurst. Tipoff is at 1 pm at Mason-Halpin Fieldhouse in Kansas City, Missouri.

Drury is coming off of a 77-53 win at William Jewell on Thursday and is 17-1 with a 7-0 mark in the Great Lakes Valley Conference. They carry a 13-game winning streak into Saturday’s game against the Hawks.

Rockhurst is 8-3, 4-1 in the GLVC, and is in second place in the West Division. The Hawks won on the road Thursday with a 69-56 win at Southwest Baptist.

Saturday’s game is a rematch of the Dec. 4 contest won by the Lady Panthers 73-44 at the O’Reilly Family Event Center. That game was tied at 13-13 after the first quarter, but Drury blew open the contest outscoring Rockhurst 22-3 in the second period to take command. Paige Robinson had 19 points in that game while Terrion Moore added 15, a total that matches her season-high.

Drury leads the all-time series against Rockhurst 40-2. The Lady Panthers lost the first-ever meeting between the two teams, then won 39 in a row before the Hawks picked up a 75-69 win on Feb. 2, 2021, in Springfield.

About the Hawks
Rockhurst has gone 3-0 since Jan. 2 but has had two games canceled because of issues with COVID-19. The Hawks picked up wins over Missouri S&T, 77-73, William Jewell, 71-48, and on Thursday, they won at SBU 69-56. Rockhurst had games against Missouri-St. Louis and Illinois Springfield canceled.

The Hawks are led by Daly Sullivan, who is third in the GLVC in scoring, averaging 18.2 points. Her sister, Keegan Sullivan, is averaging 14.1 points with 7.4 rebounds per game.

Rockhurst ranks second in the GLVC in field goal defense, allowing just .363 from the floor and they are best in the league in three-point defense, surrendering a mere .258 mark from long-range.

Roster Update
As of Friday, the Lady Panthers are expected to be without Paige Robinson (hand/wrist), Kate Gilbert (leg), and Kaylee DaMitz (COVID-19 protocols). Drury was without five players for their first two games of the week following the holiday break. Drury has not yet had a game postponed or canceled this season.

Up Next
Drury concludes their three-game, five-day road trip with a game at Truman State on Monday. The Lady Panthers take on the Bulldogs at 5:15 pm in Kirksville, then will have a break in their schedule until Sat., Jan. 22, when they host Southwest Baptist.