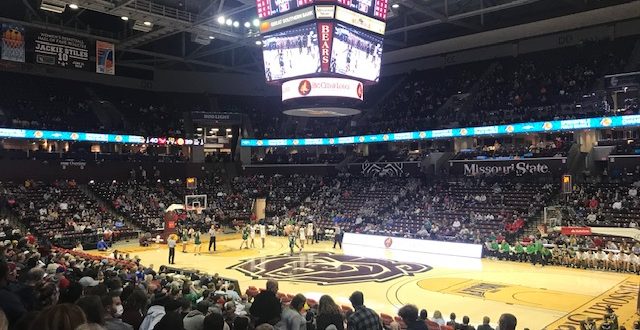 Finals Set at Bass Pro Tournament of Champions in Springfield

The final round matchups are set at the 37th Bass Pro Tournament of Champions at JQH Arena in Springfield.

The game was close throughout, with New Madrid County Central taking an 11-7 lead after one quarter and a 23-21 lead at halftime.

The Vikings trailed by two points at the end of three quarters.

The Eagles’ biggest lead was eight points in the first quarter, with the Vikings’ biggest advantage coming in the second period at three points.

Parkview Coach Landon Cornish and his players spoke to the media after the game:

The Nixa Eagles won a 56-53 thriller over the Springfield Catholic Fightin’ Irish in the consolation semifinals.

Catholic beat Nixa in the semifinals of last month’s Blue and Gold Tournament at JQH Arena, but held on for the victory Friday.

Nixa opened up a seven point lead in the second quarter, and took a 26-25 advantage into the locker room at halftime.

Catholic went ahead 42-39 after three quarters and led by as many as five points in the fourth quarter before the Eagles took the lead midway through the quarter.

But Liam O’Reilly made a layup with 22 seconds left to cut the margin to three, then after two missed free throws by the Eagles, Catholic had a chance to tie it with a three pointer.

Ty Lyon missed a three point attempt with nine seconds to go, but the Fightin’ Irish got the rebound.

After a couple of time outs, Catholic got the ball in the hands of their leading scorer, Zach Howell, who missed a three pointer at the buzzer.

Here’s the postgame press conference from Nixa Coach Jay Osborne and his players:

Sierra Canyon out of Chatsworth, California is headed to the finals of the TOC after a convincing 81-49 win over Whitney Young (Chicago, IL).

Whitney Young scored the first bucket of the game, but never had a lead after that as the Trailblazers took control early, going up 34-25 at halftime and 49-36 after three quarters.

Amari Bailey picked up a double-double for Sierra Canyon, scoring 20 points and pulling down ten rebounds.

Paul VI from Chantilly, Virginia is also in the championship game.

The Panthers pulled out a 55-54 win in overtime over Milton High School from Alpharetta, Georiga.

DeShawn Harris-Smith made two free throws for the Panthers with ten seconds left in OT to win it.

Milton’s Bruce Thornton put up an off-balance three point attempt from beyond the arc at the buzzer that bounced high off the rim and into the arms of Paul VI’s Jaquan Womack as the Panthers celebrated.

Thornton’s 19 points were tops for Milton.

Neither team led by more than seven points during the contest.

Here are the scores from Friday’s semifinals at the Bass Pro Tournament of Champions:

Here’s the schedule for Saturday’s final round of the tournament: