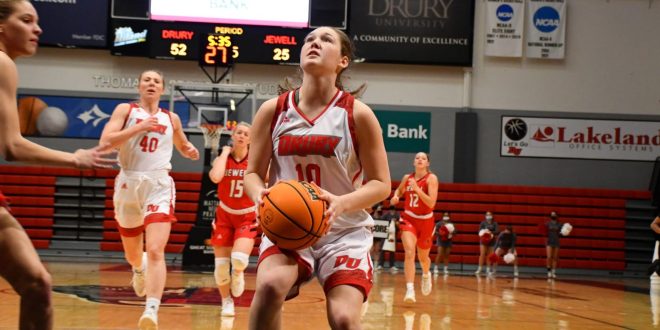 LIBERTY, Mo.— A short-handed Drury Lady Panthers team rolled to their 13th win in a row with a 77-53 win at William Jewell on Thursday in Liberty, Missouri.

Drury, ranked number one in NCAA-II, improved to 17-1 and remained unbeaten in the Great Lakes Valley Conference at 7-0. The Lady Panthers were playing without Paige Robinson, last year’s NCAA-II and GLVC Player of the Year, and Kaylee DaMitz, who was averaging 21 points in Drury’s last four games. Robinson missed her fifth game in a row with an injured hand while DaMitz was placed in COVID protocols.

After claiming a 24-15 lead at the end of the first quarter, the Lady Panthers blew open their lead, outscoring William Jewell 26-5 in the second period that included a 16-0 run by Drury to close out the half. The run gave Drury a 50-20 lead at halftime. The Lady Panther led by as much as 38 in the second half.

Drury guard Allie Clevenger, in her first collegiate start, scored 15 points in just 22 minutes while going 3 for 4 from three-point range. The sophomore from Clever jump-started her team, hitting her first four shots from the field and scoring 11 points in the opening quarter.

“We started much better than we have in the last couple of games,” said Drury head coach Amy Eagan. “Being able to jump out to that lead helped us save a little bit because of this stretch with three games in five days.”

With the win, Drury extended their road winning streak to 40 games. It is the longest such streak in Division II women’s basketball and dates back to March 12, 2018.

The Lady Panthers continue their road trip on Saturday at Rockhurst with a 1 pm game in Kansas City, Missouri.