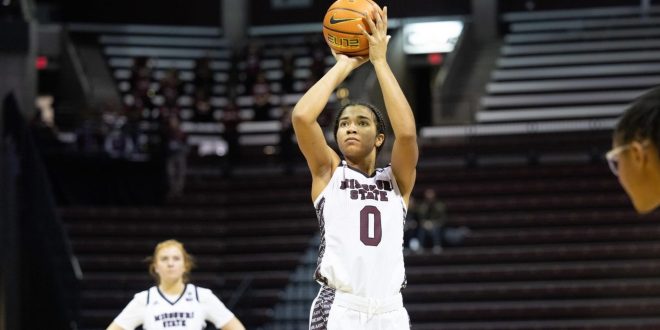 The Lady Bears got off to a slow start offensively in Cedar Falls, while the Panthers had the hot hand early, especially from behind the arc.

Missouri State tied the game at 3-3 early, but UNI used two consecutive baskets and two made free throws to take a 10-3 lead at the 6:31 mark of the first quarter. The Panthers used two more three-point baskets and an and-1 opportunity to take a 21-12 lead after one period.

The Lady Bears found some defensive rhythm, as Missouri State forced three turnovers in the second quarter while holding the Panthers to one made three-pointer. However, UNI still shot 54% percent from the field and maintained the lead through the entire second period.

Senior Mya Bhinhar sank two free throws at the end of the half to cut the Panther lead to 39-26 as the teams headed into the break.

Coming out of the break, UNI kept the momentum as they went on a 4-0 run to open the third quarter. Following the short Panther run, Bhinhar scored three consecutive baskets for the Lady Bears to pull MSU back within 12 points.

The Lady Bears shot 43 percent from the field in the third period to UNI’s 36 percent; however, free throws were the difference-maker in the quarter as the Panthers converted 11 of 12 shots from the charity stripe.

In the final quarter in Cedar Falls, the Lady Bears ran into more foul trouble as Mariah White and Wilson fouled out before the halfway mark of the final period. However, Missouri State had one more run in them, as they went on a 10-2 run beginning at the 4:20 mark with back-to-back layups from Jackson to cut the UNI lead to six points.

Despite outscoring the Panthers 24-16 and shooting 50 percent from the field in the final quarter, the Lady Bears comeback attempt fell short at the McLeod Center. MSU forced 16 Panther turnovers and outscored UNI 42-26 in the paint.

Jackson led the Lady Bears and tied her season highs with 18 points and 11 rebounds for her third double-double of the season, while Bhinhar scored a season high 14 points.

The Lady Bears will continue their Iowa road trip as they face Drake on Saturday, January 15 in Des Moines. First tip is set for 2:00 p.m.

Tickets for all home games are available at MissouriStateBears.com or through the Old Missouri Bank box office at JQH Arena, (417) 836-7678, during regular office hours.