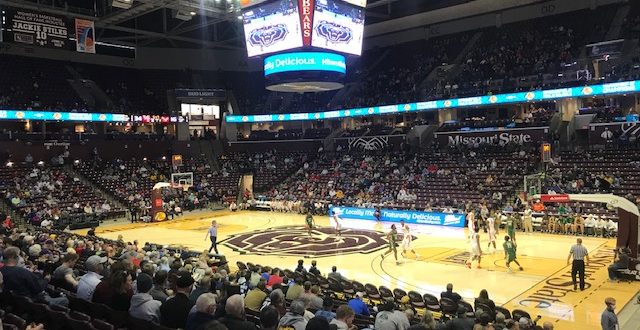 The opening round is complete at the 37th Annual Bass Pro Tournament of Champions at JQH Arena.

It’s the first time in two years the event has been held after being cancelled last year due to COVID-19.

Here are the scores from Thursday’s opening round:

Parkview jumped out to a 13-3 lead and held a 29-28 advantage at the half. T.J. Hill and Shane Glass led the Vikings with nine points each. Amari Bailey and Kijani Wright scored 16 points each to lead Sierra Canyon. Bronny James, son of NBA legend Lebron James, scored three points.

Listen to the postgame interview with Vikings Coach Landon Cornish and the players.

Milton wins the game on a buzzer-beating deep three pointer by Bruce Thornton. Nixa’s Jaret Nelson missed two free throws with 5.1 seconds left. As a team, Nixa struggled from the line, going 13-22. The game was tied 10-10 after one quarter, with Nixa taking a 21-19 halftime lead. The game was tied 34-34 after three quarters. Thornton led the Milton Eagles with 21 points, while Colin Ruffin scored 21 for the Nixa Eagles.

Listen to the postgame interview with Nixa Coach Jay Osborne.

Catholic took a 14-12 lead after one quarter, but Paul VI came back in the second period to go ahead 30-23 at halftime, and went into the final frame with a 47-38 lead.

The Fightin’ Irish got within one of the lead, 52-51, midway through the fourth quarter, but the Panthers were too tough down the stretch.

Here’s the schedule for Friday’s semifinal round of the Bass Pro Tournament of Champions:

The tournament concludes Saturday, beginning with the seventh place game at 2:30 p.m.