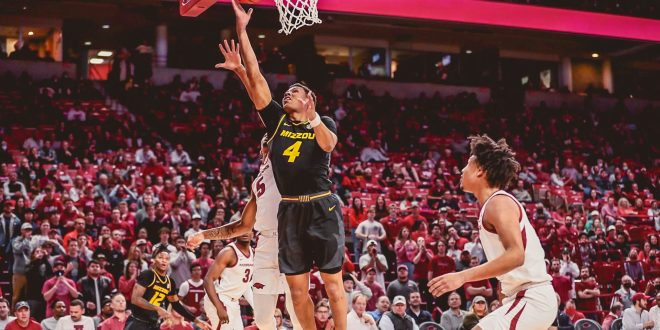 FAYETTEVILLE, Ark. — The University of Missouri men’s basketball team could not get its offense going Wednesday evening at Arkansas, as the Razorbacks took an 87-43 victory in Bud Walton Arena. Mizzou (7-8, 1-2 SEC) was led by Javon Pickett and Jarron Coleman who both recorded double-digit scoring efforts.

Pickett and Coleman had 12 and 11 points, respectively, as Coleman also lead the team with three assists. Trevon Brazile continued to show his development for the Tigers, with two blocks and a career-high eight rebounds. With his pair of blocks, Brazile has 18 on the season which ties for the ninth most all-time by a Mizzou freshman in a single-season.

Arkansas (11-5, 1-3 SEC) came out quick offensively and Mizzou wasn’t able to slow them down after the Razorbacks took a 20-3 lead. Despite the lopsided halftime score, Mizzou showed a solid start in the second half, opening the period on 6-of-7 shooting and shot 47.8 percent in the final 20 minutes of the game.