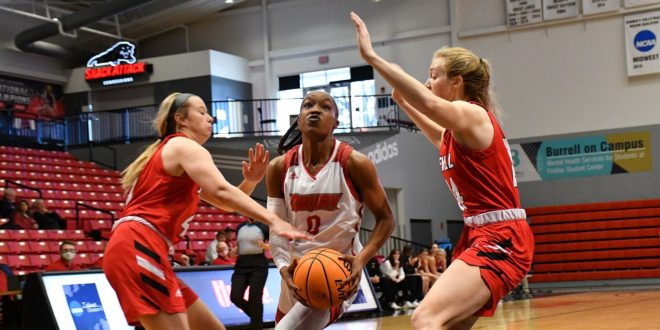 Drury is ranked number one in the NCAA-II coaches’ poll for the second straight week and is 16-1 with a 6-0 mark in the Great Lakes Valley Conference. The Lady Panthers will enter Thursday’s game on a 12-game winning streak.

William Jewell is 1-9 and 0-4 in the GLVC. The Cardinals are coming off of a 69-38 loss at home to Quincy on Saturday and have lost three straight.

Drury and William Jewell played one another 11 days ago on Jan. 2 with the Lady Panthers prevailing at home 90-42. Drury held the Cardinals to just 13 of 43 from the floor and jumped out to a 20-6 lead after the first quarter. Kaylee DaMitz led the Lady Panthers with 20 points, while Alana Findley had 18 points and 7 rebounds. Katie Knock led William Jewell with 17 points.

The Lady Panthers lead the all-time series against the Cardinals 17-3 and have won 12 straight against William Jewell, dating back to Jan. 17, 2015, when the Cardinals won 80-64 in Liberty.

Drury enters Thursday’s game with a 39-game winning streak on the road, the longest such streak in NCAA-II women’s basketball. The streak dates back to a March 12, 2018, in the Lady Panthers loss at Ashland in the Midwest Regional championship game.

About the Cardinals
William Jewell’s lone win came against Graceland (NAIA) on Dec. 16, in a 64-53 victory in Liberty.

Head coach Jill Slominski is in her 26th year as a collegiate head coach,
and her 460 career wins ranks 21st among all active coaches in Division
II women’s basketball.

The Cardinals do have a player averaging double-figures in scoring but are led by Kate Hillyer putting up 9.5 points per game. Libby Arnold is next, averaging 9.2.

Roster Update
As of Friday, the Lady Panthers are expected to be without Paige Robinson (hand/wrist), Kate Gilbert (leg). Drury was without five players for their first two games of the week following the holiday break. The Lady Panthers expect to return Azia Lynch to the line-up soon. Lynch has not played since Drury’s game on Dec. 18 against Michigan Tech.

Up Next
Drury’s game on Thursday is the first of three games in six days, all of which is on the road for the Lady Panthers. Drury is at Rockhurst on Saturday at 1 pm and will travel to Truman State on Monday for a 5:30 pm tipoff.