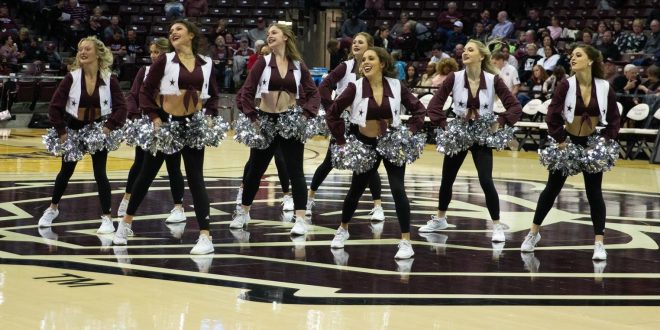 ORLANDO, Fla. — The Missouri State University Cheer Squad and Sugar Bears dance team are both competing for national honors in their respective categories at the 2022 College Cheerleading and Dance Team National Championship here, January 14-16. The national event is held at the ESPN Wide World of Sports Complex at the Walt Disney World Resort.

The cheerleaders will be competing in the Division I small coed semifinals on Saturday at 12:21 p.m. (Central) with championship finals commencing at 5 p.m. that evening.

The Sugar Bears will compete it two events on Saturday with DI Jazz semifinals at 3:49 p.m., followed by the DI Pom semifinals at 5:58 p.m. The finals in both categories will be contest on Sunday with the Pom finals at 11 a.m., and the Jazz finals at 2 p.m.

“The cheer team and the Sugar Bears have been working hard over winter break to prepare for the nationals competition,” said Emily Dryden, Missouri State spirit squads coordinator. “We are thrilled to head back to Orlando this year. In 2021, we had the unique opportunity to compete virtually right on our very own bear head. Our routines were filmed in JQH arena. But we’re excited to get back to the stage in front of a crowd and have the excitement of a live performance.”

Video footage of this year’s competition can once again be seen on Tv.Varsity.com.

The prestigious competition, which showcases the country’s best college cheerleaders, dance team performers and mascots, is marking its 39th year.

#MSUBears
This article is provided by Missouri State
Share