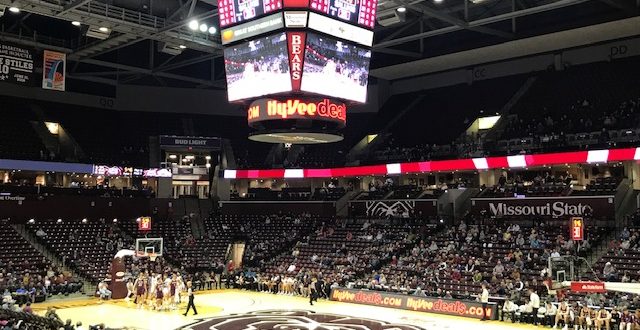 Mosley, coming off a 43 point performance in last Saturday’s loss two Northern Iowa, went 10-18 from the field, including three treys as the Bears pulled away late in a game that stayed close for much of the night.

The guard from Columbia Rock Bridge went 10-11 from the free throw line.

A three pointer by Lance Jones with 8:33 remaining got the Salukis within three, 57-54, but they would pull no closer.

SIU got a three pointer by Marcus Domask with 26.9 seconds left to get it back to a three point game, 77-74, but Mosley and Isaac Haney went 4-4 from the free throw line in the final 23 seconds to seal the win.

SIU drained 14 three pointers compared to six for the Bears, but MSU dominated in the paint, outscoring Southern Illinois 40-10.

Donovan Clay scored 13 points and Gaige Prim added 12 for the Bears, who improve to 12-6 overall, 3-2 in the Missouri Valley Conference.

Missouri State will play at Valparaiso on Saturday.