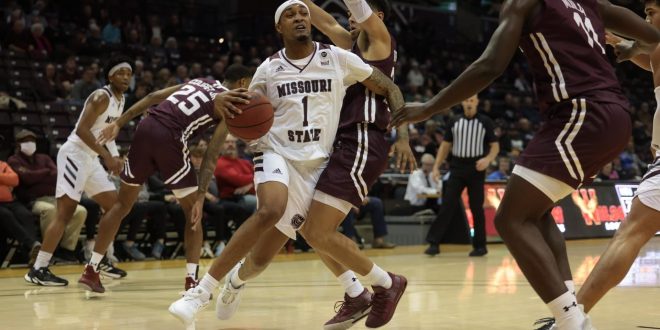 SPRINGFIELD – Missouri State got 33 points from Isiaih Mosley and made its final 18 free throw attempts of the night to seal an 81-76 win over visiting Southern Illinois here Wednesday.

Donovan Clay added 13 points, and Gaige Prim scored 12 for the Bears who won for the eighth time in 10 games.

Missouri State shot 52.8 percent from the field for the game, including 62 percent in the second half, to set a blistering offensive pace.

The Bears seemed to have put things on ice after a dunk by Clay with 1:27 to go in the game gave the home club a 71-62 lead. But Coupet then drained a 3-pointer for SIU on its next possession trim its deficit to six before Domansk decided to put on a scoring exhibition in the game’s final minute.

In between Domansk’s 11 points in the final 57 seconds – including a pair of 3-pointers – the Bears secured the game at the line. Mosley, Prim and Isaac Haney combined to go 10-for-10 in the final 70 seconds. The accurate foul shooting helped the Bears overcome an untimely turnover in the backcourt in game’s last 10 seconds that ultimately sent Domansk to the line to make it a 79-76 game with five seconds remaining.

Haney then iced the win by making 2-for-2 with 3.1 ticks to go. He finished 4-for-4 at the line and shared a team-high with 6 rebounds, along with Black and Prim.

The first half was full of runs with the Bears mounting the final one of the period to lead 36-34 at the midway point. The Salukis took a seven-point advantage just over five minutes into the game, pushing ahead 13-6 after a 10-3 run.  MSU responded midway through the period with a 10-0 stretch that finished with a triple from Mosley to make it 18-15.

SIU made just five field goals in the last 10 minutes of the opening half, all from 3-point range, to stay close and even retake the lead for a brief period. But Missouri State ended the half with a series of defensive stops before a Ja’Monta Black’s triple on the Bears’ last possession gave the home side a 36-34 lead at the intermission.

The Bears take to the road Saturday for a 4 p.m. tilt at Valparaiso on ESPNU before returning to JQH Arena in a week to play Illinois State on Jan. 19. Tickets for the Illinois State game are available at MissouriStateBears.com or by visiting the Old Missouri Bank Box Office at JQH Arena, (417) 836-7678, during regular box office hours.