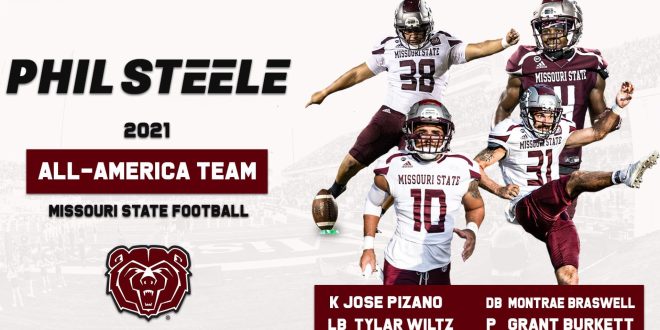 Burkett was a conseneus All-American this year after previously being named as an FCS All-America second-team pick by the AFCA and third-team selection by the AP, STATS Perform and Hero Sports. He finished the season ranked second nationally and first in the MVFC with a school-record punting average of 46.2 with 16 punts of at least 50 yards and 15 kicks downed inside the 20. The All-MVFC first-team selection also helped lead the Bears to a No. 2 national ranking in net punting (42.8). As a redshirt freshman in the spring 2021 season, Burkett earned All-MVFC honorable mention laurels prior to his breakout performance this fall.

After earning All-MVFC first-team honors at two positions this season, Braswell was named as an All-American second-team selection by the AP and STATS after Hero Sports also named him to its Sophomore All-America Team at both DB and return specialist. Defensively, Braswell finished third in the Missouri Valley Defensive Player of the Year voting and ranked seventh nationally and tops in the MVFC in passes defended per game (1.4). He also snagged four interceptions and brought down 44 ball carriers with 33 solo stops this season. On special teams, his 29.4 kickoff return average currently ranks sixth nationally and tops in the MVFC. He was also a two-time MVFC Special Teams Player of the Week this season. In the spring of 2021, Braswell also earned All-MVFC first team, MVFC All-Newcomer Team and was on the Hero Sports Sophomore All-America Team also in the spring.

Pizano also earned AP All-America second team honors this season. He made 14 consecutive field goal attempts to end the regular season to rank third in the nation in field goals per game (1.75). He earned All-MVFC second-team honors for the second straight season after ranking ninth among all FCS kicker in field goal percentage this season (.875) with 21-of-24 makes. In terms of scoring, Pizano’s 109 points this season were the most-ever by a Missouri State place kicker, while his 9.1 points per game ranked seventh nationally and tops in the Valley. He also converted 46-of-47 extra points this season and earned MVFC Special Teams Player of the Week for 13-point output in the team’s win at Dixie State on Nov. 20.

Wiltz was an All-MVFC second-team pick for the second year in a row after leading the Bears in total tackles (106) for second year in a row. He was also Missouri State’s team leader in tackles for loss (14.5) to go with 51 solo stops, 3.5 sacks, 3 interceptions and 4 forced fumbles. He ranked 14th nationally in forced fumbles per game (0.33) and fumble recoveries (2) and finished third in MVFC in total tackles per game (8.8) and second in tackles for loss per game (1.1), which also chart at 37th and 43rd nationally. Wiltz logged 10 or more tackles in five different games, including a career high with 16 total tackles at Youngstown State, and was MSU’s top tackler in six games this season.