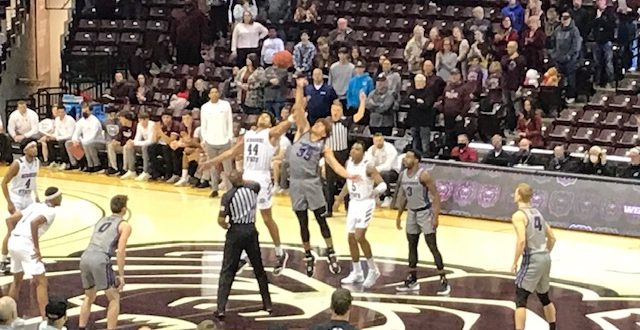 The Northern Iowa Panthers win a thriller of the Missouri State Bears 85-84 Saturday at JQH Arena.

UNI’s A.J. Green hit three free throws with 52 seconds left in regulation to break a 76-76 tie, then hit four more from the line in the final minute to finish with 33 points.

Missouri State’s Isiaih Mosley finished with a career high 43 points in a losing effort for the Bears.

It’s the third most points ever scored in a game by a Bears player, and the most since Jimmie Dull scored 53 in a game against Kentucky Wesleyan on February 7th, 1977.

MSU opened up an 11 point lead midway through the first half when Donovan Clay hit a three pointer with 10:42 left.

Mosley hit a jumper with four seconds left in the half to allow Missouri State to take a 34-33 lead into the locker room at halftime.

Keaton Hervey and Mosley hit buckets for the Bears over the next two and a half minutes to go up 58-53 with 11:31 left in regulation.

But Green took control for the Panthers, hitting a three pointer at the 10:16 mark to pull his team within one, then making a layup with 8:55 left to give UNI a 60-59 lead.

The game continued to go back and forth, with four more lead changes until Mosley’s fourth trey of the evening knotted the contest at 76.

After Northern Iowa took the lead in the final minute, the Bears wouldn’t quit.

Mosley hit a pair of free throws with 26 seconds remaining to pull the Bears within three, 81-78.

That gave him 40 points on the day.

But Green hit a pair of free throws with 19 seconds remaining to push the lead back to five.

Black knocked down a three pointer with 11.5 seconds remaining to make it an 83-81 contest, but UNI’s Bowen Born sank a pair of free throws with 1.1 seconds on the clock to extend the lead to four.

Mosley’s memorable scoring performance had one last chapter as he sank a three with 1 second left to pull the Bears within one, but the buzzer sounded as UNI got the ball inbounds.

Mosley went 5-10 from behind the arc and 6-8 from the free throw line, and led his team with nine rebounds.

The Bears went 12-17 from the line, with all of those attempts coming in the second half.

Northern Iowa went 22-26 from the charity stripe for the game, with Green hitting 13 of 14 attempts, all in the second half.

The game featured a total of 41 fouls, 29 of them called in the second half.

Each team committed only four turnovers, and shot 52% from the floor.

The Bears fall to 11-6 overall, 2-2 in the Missouri Valley Conference, while Northern Iowa goes to 7-7 overall, 3-1 in the Valley.

Bears Coach Dana Ford addressed the media after the game: