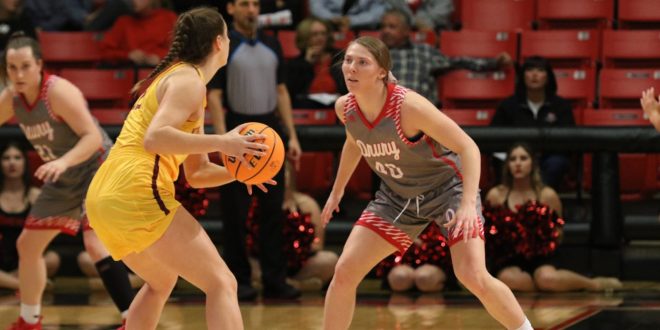 Drury is the number one ranked team in NCAA-II women’s basketball with a record of 15-1, and a 5-0 mark in the Great Lakes Valley Conference. The Lady Panthers are coming off of a 65-45 win at Illinois Springfield on Thursday and have wins this week over William Jewell and Southwest Baptist. All three of those games were played without Drury starters Paige Robinson (hand and wrist injury) and Azia Lynch (COVID-19 protocols). The Lady Panthers have won 11 straight entering Saturday’s contest

Lewis is 3-8 and 1-2 in the GLVC. The Flyers lost at Truman State on Thursday, 83-75; their only game played this week. Lewis had the games on Sunday and Tuesday canceled due to issues with COVID-19.

Drury leads the all-time series against the Flyers 17-7 and has won each of the last eight meetings between the two teams. The Lady Panthers won last year’s encounter 100-57 on Feb. 20, 2021, at the O’Reilly Family Event Center.

About the Flyers
Lewis is 3-8, but that record is deceiving as the Flyers have played a schedule that has included nationally ranked teams with regional powers with games that have been tightly contested. Lewis has lost to ninth-ranked Ashland by one, 80-79, to 16th ranked Grand Valley State by five, 65-60, and played regional powers Ferris State, Michigan Tech, and Northern Michigan all within eight.

Matt Nelson is in his first season as the Flyers head coach after serving three seasons as an assistant. Nelson took the reigns after previous head coach Samantha Quigley-Smith moved to the Division I level taking over the job at Southern Illinois-Edwardsville.

Grace Hilber leads Lewis in scoring, averaging 16.6 points, while Kathryn Schmidt averages 15.8 points and is their leading rebounder with 7.1 boards per game.

Roster Update
As of Friday, the Lady Panthers are expected to be without Paige Robinson (hand/wrist), Kate Gilbert (leg), and Azia Lynch (illness). Drury was without five players for their first two games of the week, and two returned to the active roster on Thursday – forward Bella Sparaco and center Aiden Moxness.

Up Next
Drury’s pattern of games on every other day will pause after Saturday’s contest, and the Lady Panthers return to the court on Jan. 13 with a road game at William Jewell. Those two teams will have played just 11 days prior to next week’s game, with the Lady Panthers having won the earlier meeting, 90-42, at the O’Reilly Family Event Center on Jan. 2.