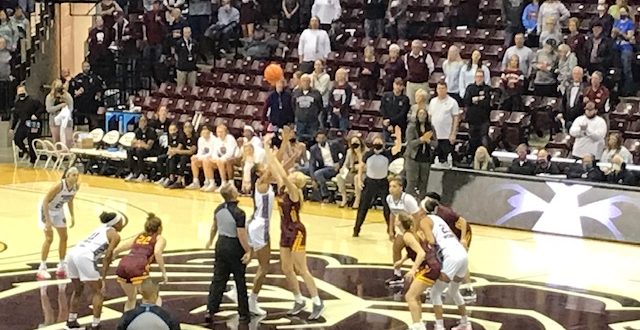 It’s the 20th straight win in Valley play for the Lady Bears, who completed a perfect record in conference games last season.

The contest was briefly tied 2-2 less than two minutes into the game, but the Lady Bears went on an 8-0 run with buckets from Mia Bhinhar, Sydney Wilson, and Isabelle Delarue to take a 10-2 lead.

Loyola got a three pointer by Trinity Clinton with 40 seconds left in the first quarter to make it a 10-5 game after the first ten minutes of play.

Bhinhar limped as she was helped off the court by teammates after tweaking an ankle with 6:55 left in the second period.

Coach Amaka Agugua-Hamilton says she doesn’t know if her 5-9 senior will be ready to go for Sunday’s home game, but says Bhinhar will be back.

The Lady Bears extended the lead in the second quarter, going ahead by 15 points, 20-5, when Paige Rocca hit a three pointer.

Loyola cut the margin to seven on a couple of occasions early in the third period, but could get no closer as MSU closed out the quarter on a 6-0 run to take a 42-27 lead into the final frame.

Clinton led the Ramblers in scoring with nine points, followed by Allison Day with seven.