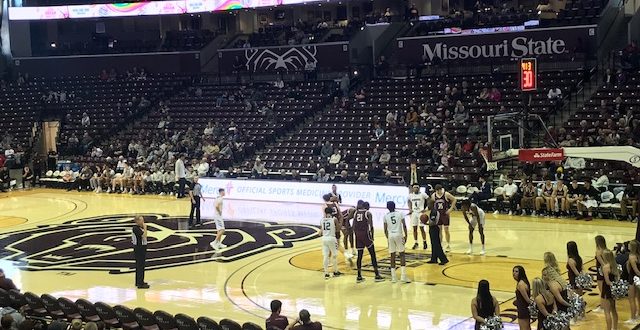 The Misssouri State Bears hit a team record 21 three pointers in a 103-56 win over the Evangel Valor Thursday afternoon at JQH Arena in Springfield.

The trey’s starting raining down early as Jaylen Minnett drained one from long distance just 48 seconds into the contest to give the Bears a 3-0 lead.

Evangel answered with a three pointer by Pavel Antonov to knot the game 3-3 with 18:49 left in the first half.

Evangel got to within seven of the lead when Josh Pritchett hit a jumper with 5:38 left in the half to make it a 35-28 game.

But after both teams traded buckets, Missouri State went on a 15-0 run to close out the half with 12 three pointers and a 52-30 lead.

The Bears continued to dominate in the second half, and when Ja’Monta Black connected on a right wing trey with 7:43 left in regulation, MSU had a new school record for three pointers with 18.

The game marked the return for Missouri State guard Demarcus Sharp, who missed eight game with a leg injury.

Sharp scored six points in just over 23 minutes of action.

M-S-U’s Lu’cye Patterson was ejected from Thursday’s game when he received a double technical foul with 6:58 left in regulation. Evangel’s Salvi was also whistled for a technical foul as the two players had an exchange at the end of a play.

Missouri State improves to 8-4 overall and Evangel drops to 9-4 with its third straight loss.

The Bears open the home portion of their Missouri Valley Conference schedule with a 7:00 p.m. game on Sunday against Valley preseason favorite Drake.