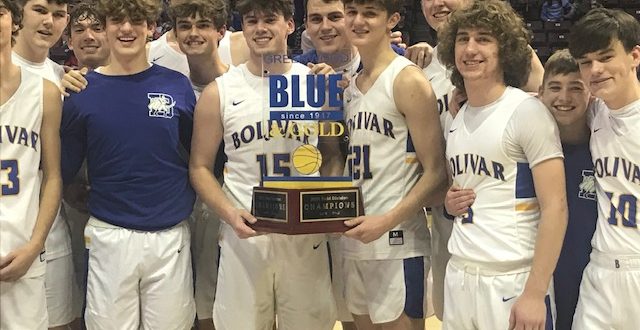 The Kickapoo Chiefs and the Bolivar Liberators are the champions of the 76th Annual Greenwood Blue and Gold Boys Basketball Tournament in Springfield.

The Chiefs, seeded second in the Blue Division, pulled away late to defeat the Springfield Catholic Fightin’ Irish 62-49 at JQH Arena to win their 13th championship in the Blue and Gold.

The Chiefs’ 13 titles are two better than Ozark, who has 11.

For awhile, it looked like the Fightin’ Irish from Springfield Catholic would challenge the Chiefs as Catholic led 12-11 after one quarter, with Kickapoo bouncing back to take a 25-20 lead at halftime.

The Chiefs took a 36-30 lead into the final quarter, but Catholic wouldn’t go way.

Liam O’Reilly hit a three pointer with 4:13 left in the contest to turn a nine point deficit into six, 45-39.

After a Kickapoo bucket, Catholic’s Ty Lyon hit a shot and was fouled, making a free throw to pull the Fightin’ Irish within five, 47-42, with 2:49 remaining.

But Kickapoo went on an 11-1 run, highlighted by big shots from Andrew Robinson and Brayden shorter.

Trae Oetting scored 21 points to lead the Chiefs, who win their ninth game of the season.

Catholic’s Zach Howell led his team with 16 points, and becomes the fifth leading scorer all time in Blue and Gold Tournament history.

Howell’s 249 points in the tournament place him behind only Zack Kleine from Mt. Vernon (288), Aminu Mohammed from Greenwood (276), Russell Matlock from Lebanon (273) and Howard Arndt from Republic (252).

The Liberators looked like a team on a mission after narrowly escaping with a 54-51 win over Springfield Central in the quarterfinals.

Bolivar jumped out to a 13-9 lead over Ozark after one quarter, and extended their advantage to 33-18 at the half and 52-39 after three quarters.

The Liberators, who remain unbeaten on the season at 11-0, maintained a double digit lead for much of the final period.

The Nixa Eagles capture the third place trophy in the Blue Division with a 66-25 win over Hartville.

The Eagles led 52-23 after three quarters and used a running clock for much of the final eight minutes.

The game marks the end of a coaching era in the Blue and Gold Tournament as Nixa Coach Jay Osborne, who’s retiring at the end of this season, completed his 78th overall win in the event.

He goes down as the winningest coach in tournament history in terms of overall wins with 78 against 26 losses.

The host Greenwood Blue Jays get by Republic in the Gold Division third place game 65-62.

The Blue Jays held an eight point lead, 19-11 after one quarter before going up 38-28 at halftime.

But the Tigers came back in the third period, pullng within four of the lead, 47-43, going to the fourth quarter.

Republic cut the lead to one a couple of times in the final period, the first with 3:55 left in regulation when a three pointer by Ahlante Askew made it a 56-55 game.

Tommy Pinegar made six out of six free throw attempts in the final minute and a half to help secure the win.

The Tigers pulled within one of the lead with a three pointer at the 21 second mark, but Pinegar drained two free throws with 17 seconds on the clock to increase the margin to three.

Nicholas Burri’s 17 points paced Greenwood, who finished third after winning back to back championships in 2019 and 2020.

Here are the final scores from Thursday’s championship night at the Blue and Gold Tournament:

The Speedy Collins Sportsmanship Award in the Blue Division was awarded to the Mountain Grove Panthers, while Spokane wins the award in the Gold Division.