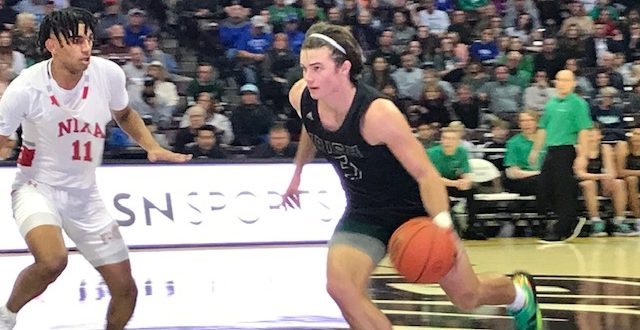 Catholic, Kickapoo, Bolivar and Ozark Advance To Finals at the Blue and Gold Tournament

The final round matchups are set in the 76th Annual Greenwood Blue and Gold Basketball Tournament in Springfield.

In the Blue Division, the Fightin’ Irsh from Springfield Catholic are headed to the championship game, stunning top seeded Nixa 49-48 in a game that came down to the closing seconds.

The loss denied a chance for Nixa Coach Jay Osborne to tie Russ Kaminsky for the most titles in Blue and Gold history with eight.

Osborne already holds the record for the most wins in the tournament with 77 against only 26 losses.

Catholic will be looking for its fourth tournament championship.

Catholic jumped out to an early lead against the Eagles, going up 9-6 after one quarter and 18-16 at halftime.

The Fightin’ Irish held a 33-30 lead after three quarters.

Senior Zach Howell put on a show for Catholic, draining three straight three pointers in the fourth quarter, putting his team ahead 44-34 with 4:15 remaining.

But Osborne’s Eagles mounted a comeback, pulling within five, 46-41, when Colin Ruffin hit a layup and was fouled with 2:58 on the clock.

Howell got to the free throw line with 1:22 remaining and calmly sank both shots, increasing Catholic’s lead to 49-44.

Nixa’s Kael Combs hit a layup that cut the lead back to three, 49-46, with just over a minute left.

With 49 seconds to go, Nixa came up with a steal and Ruffin, who was fouled going up for a layup, made one of two free throw attempts to cut the margin to two, 49-47.

Catholic then lost the ball out of bounds, but Ruffin was whisled for an offensive foul with 36 seconds to go.

Catholic’s Ty Lyon missed a pair of free throws with 35.9 seconds left in regulation, giving the ball back to the Eagles.

Combs drew a foul with 21.8 seconds on the clock and made one of two free throw attempts, cutting the lead to one point, 49-48.

Catholic turned over the ball again on the inbounds pass, giving the Eagles the ball with 21.8 seconds left and a chance to win the game prior to Ruffin’s missed shot.

Howell finished with 33 points, with five treys. Ruffin scored 23 to lead the Eagles.

Catholic will meet the Kickapoo Chiefs in the Blue Division championship game at 7:00 p.m. Thursday.

Kickapoo jumped ahead of the sixth seeded Hartville Eagles and never looked back, going ahead 35-17 at halftime and 47-28 after three quarters.

The Bolivar Liberators are back in the Blue and Gold finals for the first time since 2015.

The top seed in the Gold Division rolled to a 70-39 win over the fifth seeded Greenwood Blue Jays.

Greenwood led the contest 13-12 after one quarter, but the Liberators dominated in the second quarter to grab a 33-22 lead at halftime.

The Liberators continued to extend the margin in the second half, going up 52-30 after three periods and triggering the turbo clock in the final moments of the game.

The loss for Coach Darren Taylor’s Blue Jays ends a 10-game winning streak for Greenwood in the tournament.

The Ozark Tigers overcame an early 10-0 deficit to defeat the Republic Tigers 55-45 in the other Gold Division semifinal.

Republic led 10-3 after one quarter, but Ozark made a second quarter run to knot the contest 25-25 at halftime.

Ozark clung to a 35-33 advantage after three quarters before pulling away down the stretch.

Ozark is in its first Blue and Gold finals since 2018, when the Tigers lost to Catholic 74-64.

Here are the final scores from Wednesday’s semifinal round at the Greenwood Blue and Gold Tournament (seeds in parenthesis):

Here’s the schedule for Thursday’s championship night at the 76th Annual Greenwood Blue and Gold Tournament: