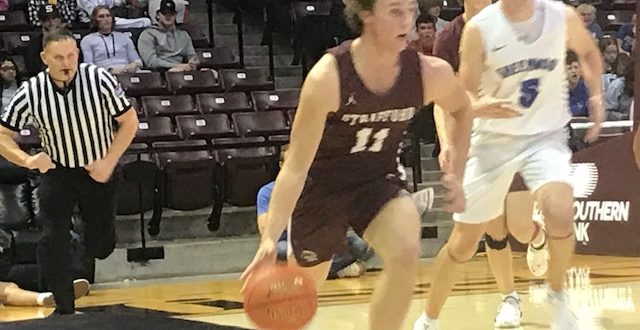 The semifinal round matchups are set at the 76th Annual Greenwood Blue and Gold Boys Basketball Tournament in Springfield.

Here are the recaps from Tuesday’s quarterfinal round games:

The top seeded Nixa Eagles advanced to the semifinals in the Blue Division with an 85-43 victory over Fair Grove.

Jay Osborne’s Eagles continued to dominate in the second half.

Colin Ruffin and Jordyn Turner each scored 17 points to lead Nixa as Osborne, the all time winningest coach in Blue and Gold history, earns his 77th victory in the tournament.

Springfield Catholic punched its ticket to the semifinals in the Blue Division with a 58-47 win over the Marshfield Blue Jays.

The Fightin’ Irish, seeded fourth in the Blue, got 23 points from Zach Howell and 21 points from Ty Lyon.

Catholic led 14-10 after one period and 29-18 at halftime, but started to pull away from Marshfield in the third quarter, going up to 18.

The second seeded Kickapoo Chiefs fought off an early push from the Branson Pirates to win 73-47, advancing to the Blue Division semis.

The Chiefs held a slim 16-14 lead over the Pirates, but opened things up in the second quarter to take a 41-23 lead at the half.

Kickapoo was able to maintain a double digit lead throughout the second half.

The Chiefs were led in scoring by Zaide Lowery, who finished wiht 25 points.

In one of the tightest games of the tournament so far, the defending state champion Hartville Eagles, seeded sixth in the Blue Division, defeated the Willard Tigers 47-41.

The game was close throughout, and Hartville didn’t begin to pull away until the closing minutes.

The two teams were tied 6-6 after one quarter, with Hartville owning a 22-17 halftime advantage.

The Eagles held a slim 32-30 lead after three quarters, but made some big shots and hit free throws down the stretch.

Senior Eric Wilson led Hartville with 17 points, while Haden Brown scored 17 to pace the Tigers, who will play second seeded Kickapoo in the semifinals at 5:30 p.m. Wednesday.

The Bulldogs came out hot to start the third quarter, going on a 8-0 run that saw them take an 11 point lead, 33-22, midday through the frame.

When junior Kyle Pock hit a shot underneath the bucket, the Liberators capped a 13-3 run to pull within a point, 36-35.

Trailing 37-35 going into the fourth quarter, the Liberators continued to turn the momentum, tying the contest 37-37 with 7:41 left in regulation as Pock hit another shot, scoring his team’s last nine pionts.

Pock drained a top of the key three pointer with 5:51 left in regulation to give the Liberators a 42-39 lead.

Central immediately answered with a trey from Jamarius Lawrie to knot the score 42-42 with 5:34 remaining.

The Bulldogs hit another three pointer with just under four and a half minute left in the game to grab a 45-42 advantage.

It was the Liberators turn to go on a run. Josh Bowes hit a shot, was fouled and made a free throw with 2:51 left to give the Liberators a 48-45 lead.

But a last second game-tying three point attempt hit off the rim as Bolivar advanced to the semifinals.

Pock’s 20 points led the Liberators in scoring, with Starks-Fewell scoring 14 to pace Central.

The host Greenwood Blue Jays extend their winning streak in the Blue and Gold to 10 games with a thrilling 56-52 win over the Strafford Indians.

Greenwood, seeded fifth in the Gold, trailed the Indians 16-15 after one quarter, then knotted the contest 28-28 at halftime.

Strafford jumped out to a three point lead, 41-38, at the end of the third period.

The Indians got a three pointer from Seth Soden with 3:40 left in regulation to take a 50-45 lead, but the Blue Jays weren’t done.

Greenwood’s Tanner Jones hit a shot, got fouled and sank a free throw with 3:19 remaining to pull within two 50-48.

On the Blue Jays’ next possession, Jones did it again, getting fouled while making a shot underneath and hitting another free throw to give Greenwood a 51-50 lead.

Nicholas Burri hit one of two free throw attempts with 2:32 left to make it 52-50 before Strafford’s Avery Voysey tied the contest 52-52 with a layup at the 2:02 mark.

Jones went back to the charity stripe moments later and nailed two more free throws to give his team a 54-52 lead.

Strafford picked up a steal with 53 seconds remaining, but committed a traveling violation with 39 seconds left.

Strafford missed a three point attempt on the right wing in the closing seconds.

Jones led all scorers with 20 points, with Soden putting in 15 for the Indians.

The Ozark Tigers advance to the Gold Division semifinals with a buzzer beater at JQH Arena.

Ozark gets a tip-in at the buzzer by sophomore Jace Whatley to defeat the Logan-Rogersville Wildcats 46-44.

With the game tied 44-44, the Wildcats had the ball underneath Ozark’s basket with 8.2 seconds left in regulation.

J.J. O’Neal’s shot underneath the basket was blocked by Ozark’s Cannon Little.

The basketball ended up in Ethan Whatley’s hands, and he fed a pass to Tyler Harmon, who drove down court and had his layup attempt go off the glass and off the side of the rim.

Jace Whatley had the ball go off his right hand and was able to slap it with his left hand, and the ball went off the glass and in as time ran out, preserving the win for the second seeded Tigers.

The game was a defensive struggle early on as Rogersville led 6-4 after one quarter.

The Tigers bounced back to grab an 18-15 halftime lead, and Ozark led 34-31 after three periods.

With 36.5 seconds left in regulation, O’Neal made two free throws for Rogersville, giving his team a 44-43 lead.

Ozark’s Jace Easley knotted the game at 44 when he hit one of two free throw attempts with 23.7 seonds left, setting the stage for the dramatic finish.

Harmon’s 15 points were tops for the TIgers, while O’Neal had a 31 point performance for the Wildcats.

The Republic Tigers became the second #6 seed to knock off a #3 seed in the tournament Tuesday, defeating the Ava Bears 52-39.

The Tigers took a 15-9 lead after one quarter and extended the margin to 30-20 at the half.

The Bears came back to pull within five at the end of the third period, 39-34.

But Republic pulled away in the final frame to advance to the semifinals to take on Ozark.

The Tigers were led in scoring by Ahlante Askew with 19 points, while senior Andrew Dalton scored 25 for the Bears.

Here are the scores from Tuesday’s quarterfinal round games at the Blue and Gold Tournament:

Here’s the schedule for Wednesday’s semifinal round of the Greenwood Blue and Gold Tournament (seeds in parenthesis):