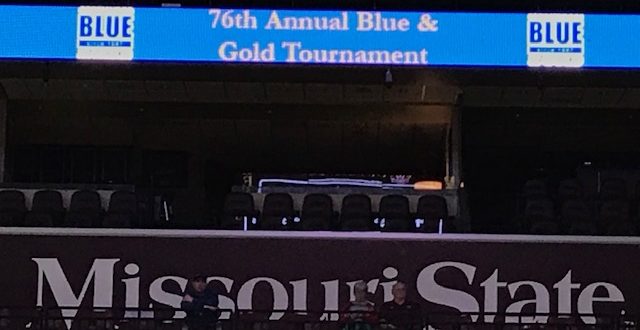 The first round of action is complete at the 76th Annual Greenwood Blue and Gold Boys Basketball Tournament on the Missouri State University campus.

The opening round games in the Blue Division took place at Hammons Student Center, with Gold Division contests at JQH Arena.

In the Blue Division, the top seeded Nixa Eagles set a Blue and Gold Tournament record with 19 three pointers in an 86-24 drubbing of Mt. Vernon.

The Eagles beat the previous tournament record of 15 treys, set by Marshfield on December 26th, 2012 in a 72-32 win over Mountain Grove.

Kael Combs put in 19 for the Eagles, hitting four from long distance.

For the Mountaineers, Kai Brown scored ten of his team’s 24 points.

Eagles Coach Jay Osborne, the winningest coach in Blue and Gold history, is now 76-25 overall in the tournament.

The Marshfield Blue Jays pull off the first upset in the Blue Division, edging fifth seeded Skyline 50-44 at Hammons Center.

Marshfield held a narrow 27-26 advantage at the half, and led 39-34 after three quarters before pulling away in the game’s final two minutes.

The Eagles held a 27-22 advantage at the half, and the Pirates stayed within striking distance, down by eight after three quarters.

The Fightin’ Irish from Springfield Catholic, seeded fourth in the Blue Division, had no problems with Clever, winning 73-46.

The Branson Pirates held off the Mountain Grove Panthers 61-51 to advance to the quarterfinals in the Blue Division.

The two teams were tied 10-10 after one quarter, and Branson carried a 25-24 lead into halftime.

The Pirates went ahead by three, 42-39 after three quarters, before pulling away down the stretch.

Springfield Kickapoo, seeded second in the Blue Division, rolled to an 81-21 win over Houston, with a running clock in the final period.

Brayden Shorter led all scorers with 21 points for the Chiefs, while Hunter McKinnery and Tanner Lee led Houston with six points apiece.

The Hartville Eagles, seeded sixth in the Blue Division, pulled away in the third quarter to defeat Reeds Spring 53-33.

The Eagles held a slim 12-10 advantage after one quarter and 25-18 at the half before extending the margin to 21 points after three quarters, 44-23.

The Willard Tigers closed out the Blue Division first round with a 71-50 win over the West Plains Zizzers.

The Tigers, seeded third, held a 38-28 lead at the intermission, then extended it to 17 points at the end of three quarters.

The Central Bulldogs have pulled off the first upset of a seeded team in the tournament, downing eighth seeded Willow Springs 61-42 in the Gold Division.

The Bears led the Bulldogs 23-18 at the half, but Central stormed back to go up 38-34 after three quarters.

Central went ahead by as many as 13 points in the final eight minutes before winning by seven.

The Bolivar Liberators, seeded first in the Gold, had no problems with Aurora, winning 70-40 at The Q.

Aurora managed to keep the running clock from going into effect for much of the fourth quarter as they kept the difference just under 30 points.

Junior Kyle Pock led the way for the Liberators with 23 points, while Lukas Gabani added 15.

Jaesik Friggle’s 17 points led the way for the Houn’ Dawgs.

The host Greenwood Blue Jays extend their Blue and Gold winning streak to nine games with a 66-43 win over the Spokane Owls.

The Blue Jays led 20-11 after one period and extended the advantage to 40-21 at the half, and coasted in the second half of the contest.

The Strafford Indians, seeded fourth in the Gold Division, took an early 10-0 lead over the Camdenton Lakers and never looked back, pulling away in the second half to win 60-36.

Seth Soden scored 12 points to lead the Indians, with Aaron Poage’s 12 points leading the way for the Lakers.

The Logan Rogersville Wildcats advance with a 53-46 Gold Division win over the Crane Pirates.

The 7th seeded Wildcats trailed 11-9 after the first quarter, but bounced back to take a 25-21 lead at halftime and went up 36-29 after three quarters.

J.J. O’Neal led the Wildcats in scoring with 20 points, while Taylor Calzaretta’s 21 points led the Pirates.

Second seeded Ozark topped Lebanon 78-39 to advance to the quarterfinals in the Gold Division.

Tyler Harmon scored 19 points to lead the Tigers, with Caleb Ray scoring 15 for the Yellow Jackets.

Sixth seeded Republic led Buffalo 26-2 after the first eight minutes of action and coasted to a 76-25 win over the Bison.

Jordan Douglas had 14 points to lead the Tigers, with Camron Portis scoring ten of Buffalo’s 25 points.

The Ava Bears wrapped up first round Gold Division play with a 58-39 win over Stockton at The Q.

The Bears led throughout, taking a 31-21 lead at halftime, then going up 46-32 after three quarters.

Senior Andrew Dalton put on a scoring performance for the Bears with 31 points.

Layne Colvin and Jay Baxter had 12 points each to pace the Tigers.

Here are the scores of opening round games, with seeds in parenthesis:

Here’s the schedule of games for Tuesday’s quarterfinal round at the 76th Annual Greenwood Blue and Gold Tournament:

The tournament continues with the semifinals on Wednesday and the final round on Thursday.