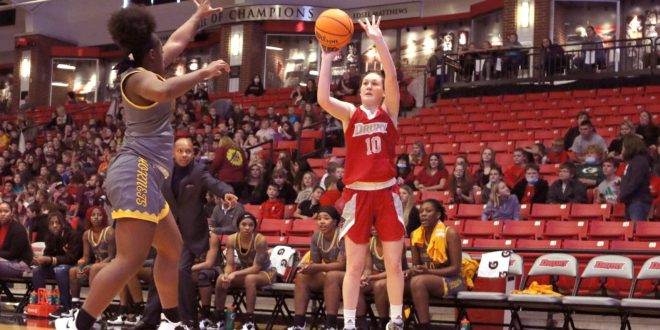 Drury is 11-1 and has been idle since a Dec. 9 win over Harris-Stowe State, 103-46. The Lady Panthers have won seven straight entering the weekend.

Michigan Tech is 8-2 and is coming off an 80-74 loss on Saturday to Ferris State. The Huskies had been nationally ranked and were 24th in the D-II coaches’ poll on Dec. 7, but their loss last weekend knocked them out of the top 25.

Both Drury and Michigan Tech were in the national tournament last year. The Lady Panthers won the Midwest Regional at home and advanced to the NCAA-II title game, while the Huskies were the top seed in the regional and lost in the second round to Ashland, 74-65.

Saturday’s game is only the third meeting ever between the two programs. The Huskies have won both encounters, including the last game, a 70-51 win on March 12, 2011, in the second round of the NCAA-II Tournament in Houghton, Michigan.

About the Huskies
Michigan Tech has won eight of their first ten games and had won five straight until their loss last week to Ferris State. The Huskies’ other loss came against 17th ranked Minnesota-Duluth, 67-50, on Nov. 20. Both of Michigan Tech’s losses have been at home.

The Huskies are led by Ellie MacKay, who is averaging 15.3 points per game. Alex Rondorf puts up 12.1 points per contest.

Michigan Tech is the defending champion in the Great Lakes Intercollegiate Athletic Conference and is picked to win the GLIAC North this season. They went 20-2 and 18-1 in the league play last year.

Best in D-II from three
The Lady Panthers lead the nation in three-point shooting percentage hitting 42 percent of their shots from behind the arc. Drury is 100 for 238 from long-range this season. Paige Robinson has hit 31 three’s and is shooting 44.3 percent, while Payton Richards is hitting 46.3 percent from distance going 25 for 54. Freshman Anna Hitt has only attempted seven three’s but has made six of them.

Return of Robinson?
Drury senior Paige Robinson returned to practice mid-week after missing the Dec. 9 game with a foot injury and could be back on the court on Saturday. Robinson was the GLVC Player of the Week in back-to-back weeks, winning the award for Nov. 22-28 and for Nov. 29-Dec. 5. She leads the team averaging 21.2 points, 3.5 assists, and 2.5 steals.

Up Next
After Saturday’s game, the Lady Panthers go into the NCAA-mandated “Life-In-Balance” break. The team will return to practice after Christmas and play their next game on Sunday, Jan. 2, against William Jewell. Tipoff is at 1 pm at the O’Reilly Family Event Center.