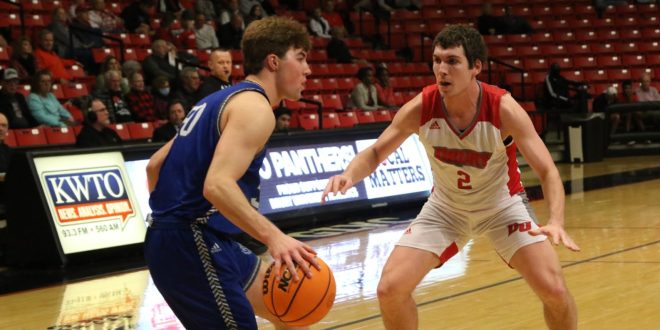 Drury is 4-5 and coming off of their first back-to-back wins of the season. The Panthers defeated Health Science & Pharmacy of St. Louis 99-93 on Dec. 10, and on Dec. 5, took down conference foe Rockhurst 90-61.

Southern Nazarene is also 4-5, but the Crimson Storm will come to Springfield having lost four straight. SNU played earlier this week and on Tuesday, lost at Southwestern Oklahoma State 77-72. Southern Nazarene’s last win came against a nationally-ranked Dallas Baptist team, 71-67, on Nov. 27. DBU was ranked 25th at the time.

Drury and SNU met earlier this season, and the Crimson Storm defeated the Panthers 80-71 on Nov. 19 in Bethany, Oklahoma. Southern Nazarene leads the all-time series against Drury 4-3. Their game earlier this season was the first match-up between the two teams since 1993.

Head coach Adam Bohac is in his 14th season leading the program and has won GAC Coach of the Year honors three times and played collegiately at Nebraska.

Coach Foster to miss Saturday’s game
Drury head coach Chris Foster will miss Saturday’s game as he continues to deal with a medical issue that has kept him off of the Panthers sidelines since Nov. 29. As with the last two games, Drury’s Chris Carr will lead the squad along with assistants Ben Fisher, who is in his fifth year with the Panthers, and Sam Briscoe, now in his third season at Drury. Foster could return to the Drury sidelines in time for their next game on Jan. 2 against William Jewell.

Roster change
Drury’s roster has changed since their last game on Dec. 10 as Clay Gayman and Dalton Gayman have both left the squad. Clay was in his junior season of eligibility while Dalton was a sophomore, but both were in their first year at Drury.

Next Up
Following Saturday’s game, Drury will be idle until Jan. 2 when they host William Jewell. The Panthers will enter the NCAA’s mandated “Life-In-Balance” break, a seven-day period with no games, practices, or team activities. Drury will resume practices after Christmas and host the Cardinals on Jan. 2 at the O’Reilly Family Event Center for a 3 pm game. The game will start a stretch of four games in seven days between Jan. 2 and Jan. 8.