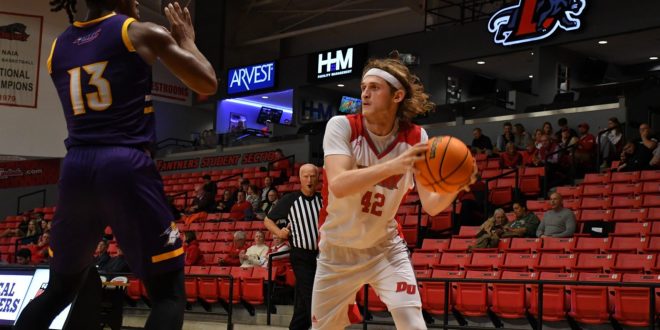 SPRINGFIELD, Mo. – The Drury Panthers, for the second time in less than a week, used a solid shooting effort and then held off a spirited late charge to defeat the University of Health Sciences & Pharmacy of St. Louis 99-93 Friday evening at the O’Reilly Family Event Center.

The Panthers found their range early, hitting on 63 percent of their attempts in the opening half, including 10 of 19 from beyond the three-point arc and raced to a halftime advantage of 60-35 over the visitors in the first-ever meeting between the two programs.

The 99 points were a season-high for the Panthers, who improved their record to 4-5 with the win, and the points were important in the closing moments as the Eutectics roared back to within four points before late free throws by Drury sealed the win.

“The beauty of it is that we had the opportunity to learn through a win tonight,” said Drury assistant coach Chris Carr.  “We’re still playing December basketball, and you hope we keep taking steps forward and not become stagnant.”

Junior Clay Gayman, with a team-high 20 points, was one of five Drury players in double figures.  Junior Malek Davis had 16 points.  Senior Obi Okafor added 13, with sophomores Quenton Shelton and Riley Nager chipping in 12 and 11, respectively.

UHSP (4-5) also had five players in double figures, paced by Mason Ballay, who finished with 25.

Drury hit 37 of 67 shots for 55 percent and made good on 13 of 28 three-point attempts.   They also edged the Eutectics in rebounding, 34-32, with Okafor leading the way with nine.

“A staple of coach Foster and his system is quality three-point shooting, and I thought in the first half we got some really good looks with our ball moment and spacing,” added Carr.

The Panthers return to action Saturday, Dec, 18th, when they host Southern Nazarene in a 7:45 p.m. meeting at the O’Reilly Family Event Center, their final contest before the Christmas break.