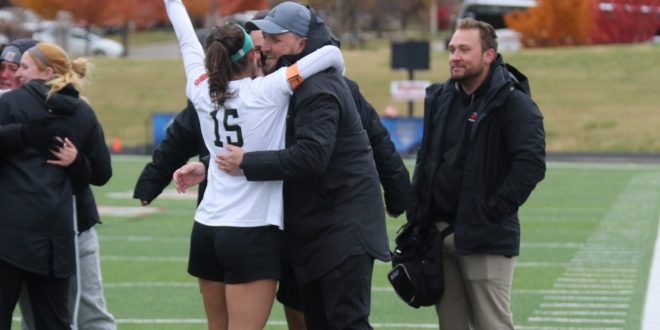 SPRINGFIELD, Mo.— Drury University head women’s soccer coach Justin Olson and assistant Melissa Kuhar were honored by their fellow coaches in the Midwest Region with the Regional Coaching Staff of the Year award by the United Soccer Coaches organization.

Olson and Kuhar led the Panthers to a 16-5-1 season, a Great Lakes Valley Conference tournament championship, and the program’s first NCAA-II tournament appearance since 2007. Drury went 10-3-1 during the league’s regular season for a second-place finish, their highest placement in team history.

The Panthers produced five all-conference performers in 2021 including the GLVC Offensive Player of the Year, Elsa Gonzalez, the league’s Freshman of the Year, Tara Simon, and Olson was named the GLVC Coach of the Year. Drury won the GLVC Championship with a 2-0 win over Southern Indiana, then defeated 15th ranked Ashland 1-0 in double-overtime on the road in the first round of the NCAA-II Tournament.

Olson and Kuhar completed their second season on the Drury women’s soccer coaching staff in 2021.