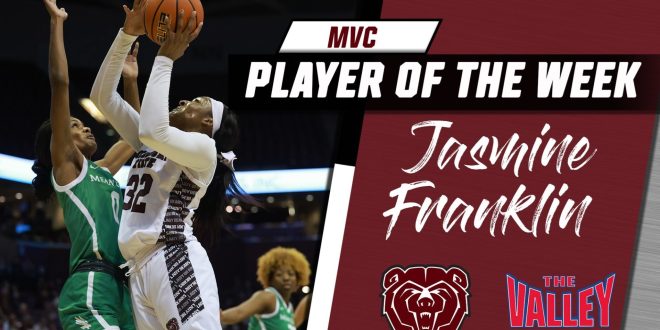 Franklin added two more double-double performances last week against Power Five foes No. 24 Virginia Tech and LSU. She now has five double-doubles in six games on the year, which ranks third in the nation.

Against the 24th-ranked Hokies on Friday, Franklin dropped 21 points and 12 rebounds on 60 percent shooting from the field, while also going 9-for-10 from the free-throw line. On Saturday against the Tigers, Franklin turned in a 13-point, 13-rebound performance to go along with four blocks and four steals.

Franklin ranks first nationally with 9.8 defensive rebounds per game and second in the nation with 13.8 rebounds per game, and is the only player in NCAA Division I averaging over 15.5 ppg, 13.5 rpg, 2 spg and 2 bpg. She paces the Lady Bears with 16 ppg and 13.8 rpg and is shooting a team-high 50 percent from the field.

This marks Franklin’s seventh MVC Player of the Week honor.

Missouri State will return home to take on William Jewell on Friday, Dec. 3 at JQH Arena. First tip is set for 7 p.m.

Tickets for all home games are available at MissouriStateBears.com or through the Old Missouri Bank box office at JQH Arena, (417) 836-7678, during regular office hours.