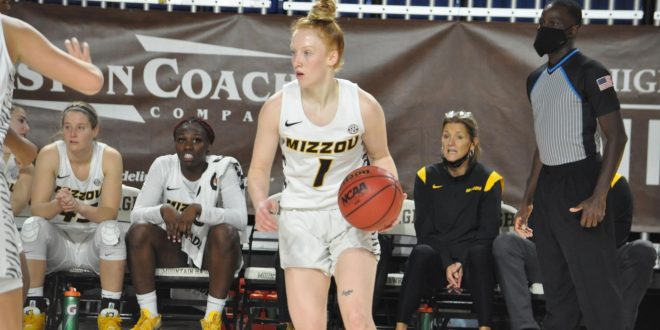 BETHLEHEM, Pa. – Mizzou Women’s Basketball (7-0) drained 15 three-pointers en route to a 21-point victory over Lehigh (5-2). Lauren Hansen scored a career-high 34 points while going 9-for-14 from beyond-the-arc. Her 34 points are the most by a Tiger since Sophie Cunningham during the 2017-18 season.

The Mountain Hawks got off to a hot start from the field, opening up a nine-point lead early in the second quarter. Lehigh shot 5-for-8 from three to start the game.

Mizzou went on a 30-5 run to push the lead to 16 in the second period. Lauren Hansen hit a step-back three at the buzzer to secure the Tigers’ 36-point quarter and a 16-point lead at the break. The Tigers hit nine threes in the quarter and shot 68.4 percent from the field.

Mizzou did not look back from there. The lead grew to 33 during the third quarter.

Lauren Hansen’s 34 points are the most by a Tigers since Sophie Cunningham had 35 against Florida Gulf Coast (3/17/18).

Hansen had not scored more that 19 points since transferring to Mizzou from Auburn. Her previous career high of 24 happened during the 2019-20 season at Auburn.

Over the second and third quarters, Hansen shot 10-for-10 from the floor, 7-for-7 from three while scoring 27 points.

Hayley Frank dropped 16 points on only 6-of-9 shooting and added six rebounds.

Aijha Blackwell finished in double-figures for the third-straight game with 14 points and seven rebounds.

Haley Troup dished out a career-high seven assists in the contest.

Hayley Frank was named the Christmas City Classic’s Most Valuable Player while Lauren Hansen earned a spot on the All-Tournament team.

The Tigers will face SIUE on Thursday, December 2nd at 7 p.m. at Mizzou Arena.