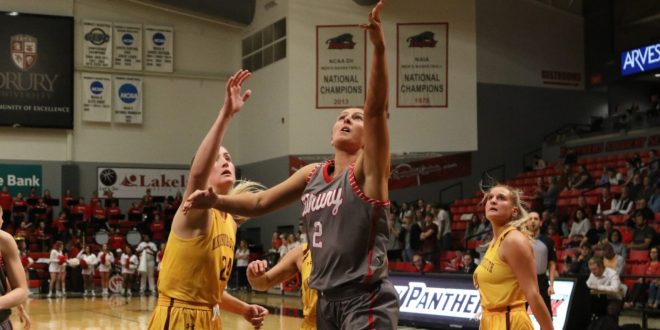 Drury is 8-1, ranked third in NCAA-II, and is coming off of a 73-56 win over 16th ranked Union (Tenn.) on Wednesday. The Lady Panthers have won four straight, with their only loss of the year coming against Kentucky Wesleyan, 76-75, on Nov. 13 in Nashville, Tenn.

Missouri S&T is 1-3 and also playing their league opener. The Lady Miners opened their season with a 115-50 win over Blackburn on Nov. 15, then have lost three straight. Missouri S&T took losses to Missouri Southern 74-50, at Northwest Missouri St. 68-48, and on Saturday at Pittsburg State 82-57.

The Lady Panthers are led by the reigning NCAA-II and GLVC Player of the Year, Paige Robinson. The senior from Bethany, Illinois is averaging 20.2 points, 4.8 rebounds, 3.4 assists, and 2.1 steals. Junior Alana Findley is averaging 13.4 points and 8 rebounds per game.

About the Lady Miners
Laura Rodriguez leads Missouri S&T averaging 14 points per game. The senior from Spain was an All-GLVC selection last year and averaged 16 ppg.

Kira Carter is in her second year as Missouri S&T’s head coach. Carter previously served as an assistant coach at Sam Houston State and Milwaukee in the NCAA Division I ranks, and she was an assistant at S&T during the 2016-17 season.

Robinson is also 19 three-pointers away from breaking Drury’s career record in that category. She enters Monday’s game with 237 three’s. Katie Pritchard (2008-13) holds the record with 255.

Up Next
Drury is back at home on Saturday when they host Rockhurst at 1 pm. Immediately following the game, Drury will introduce their 2021-22 Hall of Fame induction class.