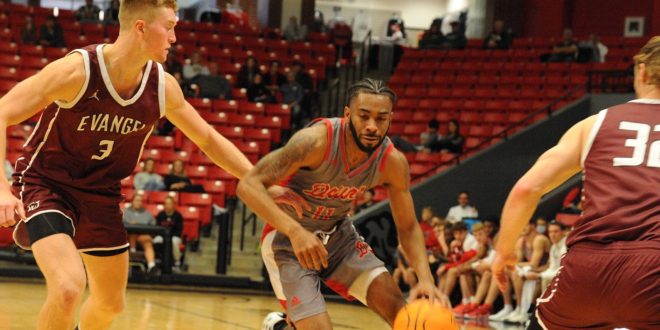 SPRINGFIELD, Mo. – The Drury Panthers and Evangel University Valor had not faced one another in 22 years prior to their meeting Saturday afternoon at the O’Reilly Family Event Center, and in this renewal of the all-Springfield meeting, Evangel got the better of the matchup, claiming an 89-62 decision over the Panthers.

The Valor, paced by a 42-point career-best scoring performance by Mountain Grove, Missouri senior Cade Coffman, were on top from the start and never trailed in the contest.

The Panthers struggled to develop a flow in the opening half, as the Valor forced them into 14 turnovers the first 20 minutes and hit seven three-pointers en route to a comfortable 44-22 lead at halftime.

Drury was never able to make a dent in the Valor (6-2) lead in the second half, only pulling to within twenty points, and the visitors won for just the ninth time in now 43 meetings between the two teams.

The Panthers, who fell to 2-4 overall with the loss, were paced in scoring by sophomore Quenton Shelton’s 14 points.  Senior Victor Nwagbarachoa added 12 points.

The Valor shot 52 percent for the game, including 12 of 26 from three-point range.  The Panthers, after a slow shooting start, wound up at 41 percent on the afternoon.

Evangel outrebounded Drury 41-29 on the boards.

The Panthers will return to action on Monday, Nov. 29th, when they open Great Lakes Valley Conference play on the road against the Miners of Missouri S&T.