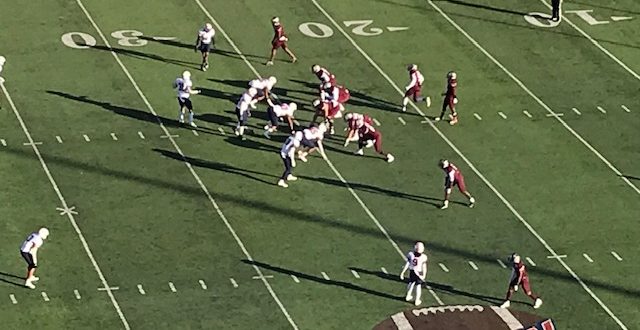 The UT Martin Skyhawks get a 37 yard touchdown pass from Dresser Winn to Donnell Williams with 3:36 left in the game to beat the Missouri State Bears in the opening round of the NCAA FCS Football Playoffs.

The contest marked the first time since November 24th, 1990 the Bears hosted a playoff game at Plaster Stadium.

Missouri State had six turnovers in the contest, including two muffed punts in the first half that were recovered by the Skyhawks.

UT Martin got on the board first on a 33 yard field goal by Tyler Larco with 4:15 left in the first quarter, but the lead was short-lived as Missouri State put together a four play, 75 yard touchdown drive.

The drive was capped by a four yard touchdown pass from quarterback Jason Shelley to senior Ron Tiavaasue. Jose Pizano’s point after kick gave the Bears a 7-3 lead after one quarter in front of 5,072 fans at Plaster Stadium.

The Bears then held on defense and prepared to get the ball back on a punt return, but Larco’s punt was muffed by MSU’s Naveon Mitchell at the Bears’ five yard line and recovered by UT Martin.

Three plays later, Winn connected on a six yard touchdown pass to Zoe Roberts with 14:48 left in the second quarter, and although the extra point attempt was blocked, UT Martin had the lead back, 9-7.

The Bears regained the advantage on a ten play, 40 yard drive capped off by Tobias Little’s two yard touchdown run with 7:14 left in the second quarter.

That put MSU up 14-9, but it didn’t last as the Skyhawks scored twice in the final minute of the first half.

Shelley, who netted 93 yards rushing in the game, fumbled at the UT Martin 42 yard line with 4:50 left in the half.

That set up a six play touchdown drive by the Skyhawks, which ended with a 14 yard TD run by Peyton Logan at the 1:52 mark. The extra point gave UT Martin a 16-14 lead.

The Bears than committed another key turnover as the ensuring kickoff was muffed by Siale Suliafu at the 25 yard line and recovered by UT Martin at the Bears’ 36.

Larco ended a five play drive with a 26 yard field goal that put the Skyhawks ahead 19-14 with 55 seconds left in the half.

Disaster nearly struck again for Missouri State’s offense as Shelley’s pass was intercepted by UT Martin and returned to the MSU 31 yard line with 43 seconds left in the half.

But after an incomplete pass, Winn’s next toss was intercepted by MSU’s Tylar Wiltz with 28 seconds left in the half.

The Bears drove to the Skyhawks’ 30, then called timeout with five seconds on the clock.

Pizano’s 47 yard field goal as time ran out in the half cut the Bears deficit to two, 19-17, going into the locker room.

The Bears took the lead with 5:48 left in the third quarter on a Kevon Latulas four yard touchdown reception from Shelley and Missouri State was back in front 24-19.

Two and a half minutes later, UT Martin’s Zak Wallace took the ball into the endzone from 14 yards out, and Larco’s kick put the Skyhawks back in the lead 26-24 at the 3:15 mark of the third quarter.

But Missouri State wouldn’t quit as Bobby Petrino’s “Cardiac Bears” put together a seven play, 67 yard drive and scored on a 29 yard touchdown pass from Shelley to Xavier Lane with 18 seconds left in the quarter, and Missouri State carried a 31-26 lead into the final frame.

Both teams came up empty on the next five possessions, but as the Bears were trying to eat some clock with a five point lead, Shelley threw an interception with just under four minutes left in regulation, and UT Martin’s John Ford returned the ball to the MSU 37 yard line.

On the very next play, the Skyhawks took the lead for good on a 37 yard touchdown pass from Winn to Donnell Williams. The two point conversion failed, leaving the visiting team clinging to a 32-31 lead with just 3:36 left in the game.

On the next possession, the Bears had a fourth down and one situation at the UT Martin 49 yard line with 2:17 remaining. Instead of handing off, Shelley went down field to Ron Tiavaasue, but has pass was incomplete, and the Skyhawks took over on downs.

The Bears held on defense and used up their timeouts, forcing UT Martin to punt.

What turned out to be MSU’s last possession of the season started at their own 20 with 1:45 on the clock, and the Bears needing to get into field goal range.

Shelley completed a 25 yard pass to Lane, who scampered out of bounds at the Bears’ 45 yard line.

Shelley hit Lane again for a nine yard gain to the Skyhawks’ 46.

But on the next play, with the Bears closing in on a potential game winning field goal, Shelley’s pass was intercepted by UTM’s D’Carrious Stephens, ending Missouri State’s playoff run.

UT Martin came into the game as a 16 point underdog, but advances to play in the second round on Saturday, December 4th at Montana State.

The Bears have their magical season come to an end at 8-4.

Coach Bobby Petrino addressed the media after the game: