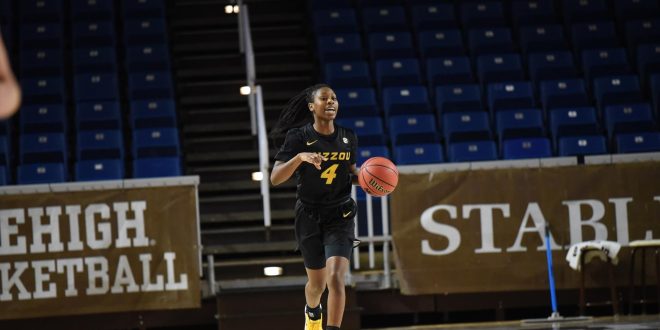 Bethlehem, Pa. – Mizzou Women’s Basketball (6-0) downed hot-shooting Columbia (5-2) by a score of 87-80 on Saturday afternoon. Hayley Frank matched her career-high of 29 points and added eight rebounds to lead the way for the Tigers. She and Aijha Blackwell each finished with 20 points or more.

After the Tigers opened up a 16-point lead in the first half, Columbia came roaring back in the second half, beginning the third quarter 7-for-8 from the field. The Lions cut the lead to six by the end of the third quarter to put the pressure on Mizzou.

Columbia cut the Tigers’ lead to just two points with less than two minutes to go in the game. After back-to-back threes. Hayley Frank’s three-point play pushed the Mizzou lead to five points and LaDazhia Williams’ steal and transition layup put the score at 84-77.

Hayley Frank matched her previous career high of 29 points and grabbed eight rebounds. She was 6-for-11 from beyond-the-arc, matching her previous high of six three-pointers in a game.

LaDazhia Williams added a season-high 15 points and dished out a career-high four assists.

Izzy Higginbottom added four points and a career-best six assists in the win.

The Tigers have had two players score at least 20 points in back-to-back games.

As a team, Mizzou dished out 21 assists, marking the first time it has recorded 20 or more assists in a contest since Feb. 21, 2021 vs. Florida.

Aijha Blackwell put up 20+ points for the third time this season.

Mizzou will face Lehigh at 11 a.m. CT on Sunday to close out the Christmas City Classic. The game will stream on ESPN+.