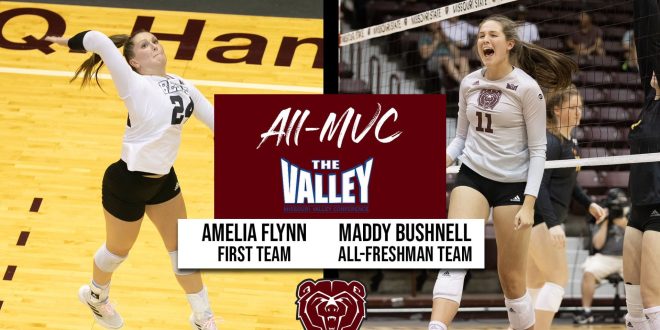 Flynn started every match and appeared in every set this season for the Bears, leading the team with 3.55 kills per set and 329 total digs. The Lake St. Louis, Mo., native averaged 2.99 digs and 3.91 points per set, pacing the Bears in kills 15 times with 14 double-doubles. The senior outside hitter had 24 double-figure kill matches and eclipsed 20 kills on three occasions, finishing the season with 14 double-doubles. She ranks fifth in the league in kills, sixth in points and 12th in digs.

Bushnell ranks second in the MVC with a .343 attack efficiency and hit .300 or better in 17 of her 29 appearances this season, topping the .400 mark 12 times. The Springfield native and Willard High graduate averaged 1.85 kills, 0.72 blocks and 2.28 points per set during her debut season.