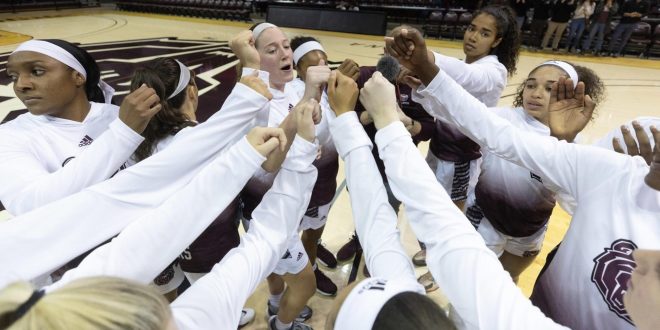 Starting Five – Storylines for the San Juan Shootout
1) Missouri State has continued its tradition of strong defensive play. The Lady Bears currently own the second-best three-point defense in the nation with a .114 percentage, while also ranking in the top 25 in scoring defense (49.2) and field goal percentage defense (.316) and in the top 40 in blocks per game (5.5).
2) According to HerHoopStats.com, senior Jasmine Franklin is currently the only player in NCAA Division I averaging at least 15 points, 14 rebounds, 2 steals and 2 blocks in 2021-22. Franklin has recorded a double-double in three of four games this season, which ranks fifth in the nation. She currently ranks in the top 25 nationally in six categories (blocks, blocks/game, def. rebounds/game, double-doubles, rebounds and rebounds/game).
3) The Lady Bears are 34-5 in their last 39 true road games and 44-8 in the last 52 games away from home. MSU will also be facing its third and fourth Power Five opponents of the season while at the San Juan Shootout, all of which have been away from home.
4) Missouri State is receiving votes in this week’s Coaches Poll. The Lady Bears are ranked 31st and garnered 12 points from the voters. MSU will face its first ranked opponent of the season when the Lady Bears take on No. 24 Virginia Tech on Friday in Puerto Rico.
5) Missouri State is 76-11 overall since Dec. 20, 2018, ranking seventh nationally in total wins since that date and fourth in win percentage (.874), trailing only Baylor, UConn and FGCU. Five teams ahead of the Lady Bears on the wins list have been ranked No. 1 in the AP Poll over that span.

The Opponents
Virginia Tech is currently off to a 5-0 start to begin the season and is ranked No. 24 in the AP Poll. The Hokies have three players averaging 10+ ppg (Traylor, Sheppard, Kitley), while Kitley leads the Virginia Tech offense with 20.8 ppg. Kitley also leads the Hokies with 49 total rebounds for an average of 9.8 boards per game and 18 blocked shots. Virginia Tech .449 from behind the arc.
LSU is led by Hall of Fame head coach Kim Mulkey and the Tigers have started the season 3-1. Offensively, LSU is led by Khayla Pointer who averages 15.5 ppg and 6.8 apg, followed by Alexis Morris with 11.3 ppg. Autumn Newby averages a team-high 10.3 rpg. The Tigers shoot .466 from the field and .275 from long range.

Series Histories
Missouri State and No. 24 Virginia Tech will face off for the first time since the 1994-95 season in this week’s San Juan Shootout. The Lady Bears lead the all-time series 1-0 against the Hokies, and took home a 61-45 victory in Springfield in the teams’ only meeting.
MSU and LSU have met two times previously, with the series tied at 1-1. In their last meeting on Dec. 18, 2004, the Tigers were victorious in Springfield, 66-54. However, Missouri State owns a win against LSU at a neutral site, where the Lady Bears defeated the Tigers 85-75 on Nov. 25, 2000.